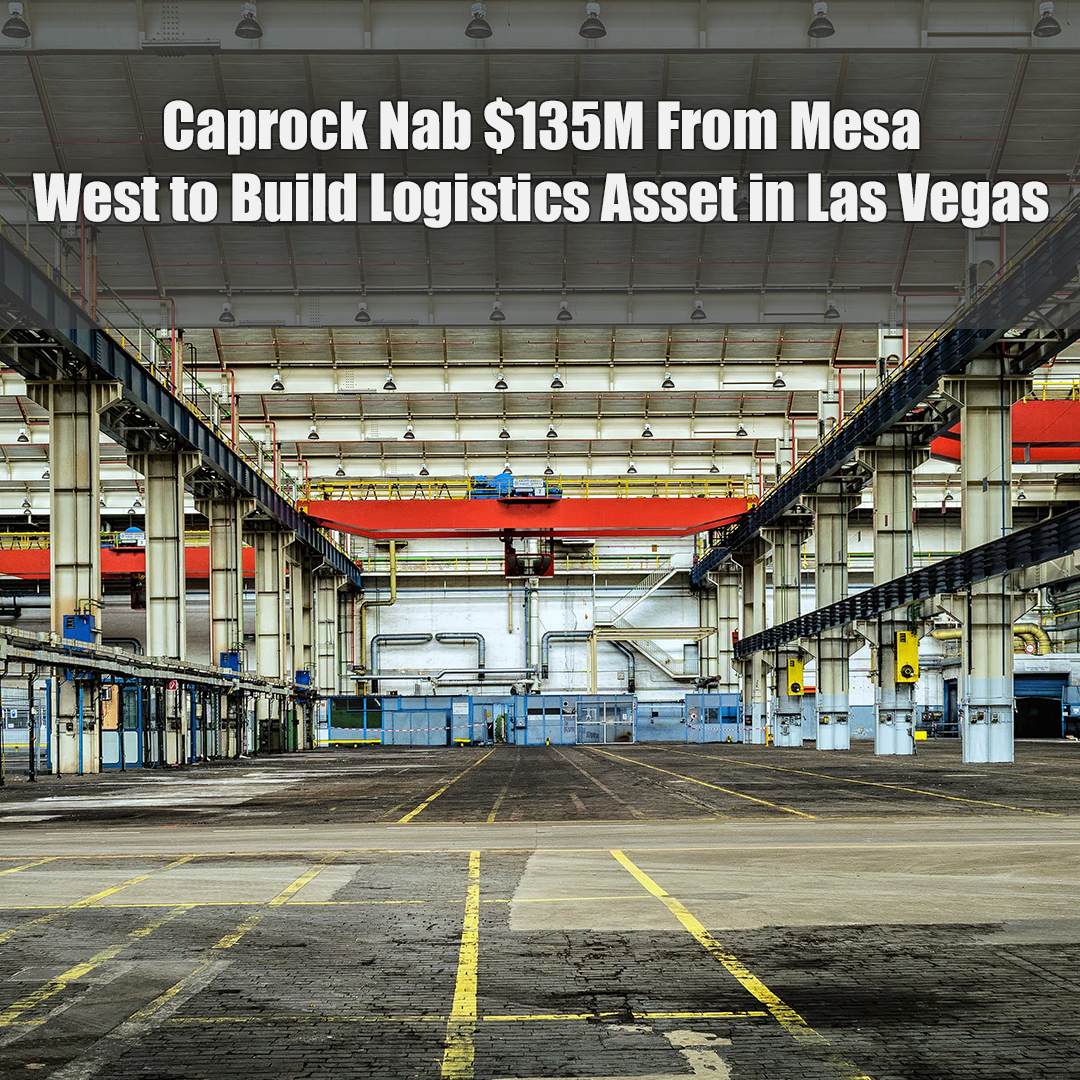 Proceeds from the five-year, floating-rate first mortgage will cover the build-out and lease-up of CapRock Tropical Logistics Park, which will comprise two buildings that will span almost 1.13 million square feet at 5802 and 5902 East Tropical Parkway, just northeast of Downtown Las Vegas and near the Las Vegas Motor Speedway.

“This transaction presented us an opportunity to lend on a 76 percent pre-leased, Class A project in a strong market with a sponsor that has a successful track record executing its business plan on industrial product in Las Vegas,” Duenas said in a statement.

CapRock announced on Nov. 9 that it broke ground on the development, which will feature one 857,060-square-foot building that is currently pre-leased to an undisclosed e-commerce tenant under a long-term agreement — and will be built-to-suit for that business — and a smaller, 271,262-square-foot building. The developer is planning to deliver the asset in the third quarter of 2021.

The site’s smaller building will be built on spec and marketed for a single tenant, although it will be outfitted to house multiple tenants. It will sport 64 dock-high loading doors, 32-foot minimum clearing heights, 194 passenger vehicle parking spaces, and up to 57 truck trailer parking spaces, according to information from CapRock.

The e-commerce tenant located in the larger building will also have about 17 acres of access land built to its specifications that border the southern edge of the actual structure.

In the first quarter of this year, the firm wrapped up a series of two dozen parcel acquisitions assembled from 13 different owners to comprise the entirety of the 85-acre site, according to its announcement. The effort included petitioning for the rezoning of a handful of the parcels last year to be eligible for industrial development, the firm said.

Duenas, in a statement, called the project “one of the last developable sites in the market.”

“North Las Vegas is the largest submarket, representing approximately 40 percent of the total industrial inventory in the Las Vegas metro [area],” Duenas added. With significant institutional ownership and credit tenant presence, North Las Vegas exhibits extremely strong market fundamentals with a low vacancy rate of 3 percent, positive leasing velocity, and significant barriers-to-entry, as much of the surrounding land is owned by the state and federal government.”

The site is adjacent to two main thruways, one of which circles the southern, eastern and northern borders of the Las Vegas metro areas — Bruce Woodbury Beltway (Interstate 215). The other is Interstate 15, which runs through Las Vegas and leads directly to Salt Lake City to the northeast and to Los Angeles to the southwest. The smaller building on the site will have about 1,000 feet of frontage directly along I-15, as per information from CapRock. As such, the asset sits about 15 minutes from the Las Vegas Strip and about 20 minutes from the city’s McCarran International Airport.

CapRock is well aware of the strength and appeal of the submarket, and as such, has already made moves in the area. It is also building a separate logistics facility nearby called the Interchange Industrial Center, a two-building, 683,000-square-foot complex that it expects to complete this quarter.

The firm entered the Las Vegas market three years ago and has since either acquired, sold or entitled approximately 3 million-square-feet worth of industrial assets in several of the area’s submarkets, according to the firm.

“In the last few years, the North Las Vegas submarket has quickly evolved to be one of the most sought-after industrial markets in the southwest U.S., evidenced by the recent developments, major leases, and record-breaking investment sales,” Taylor Arnett, CapRock’s first vice president of acquisitions, said as part of the firm’s announcement of the groundbreaking. “The demand for warehouse space has been largely fueled by consumer online shopping preferences, and the magnitude of this project reflects our confidence in both this market and our project team’s ability to deliver a class A product that attracts high-quality tenants.”