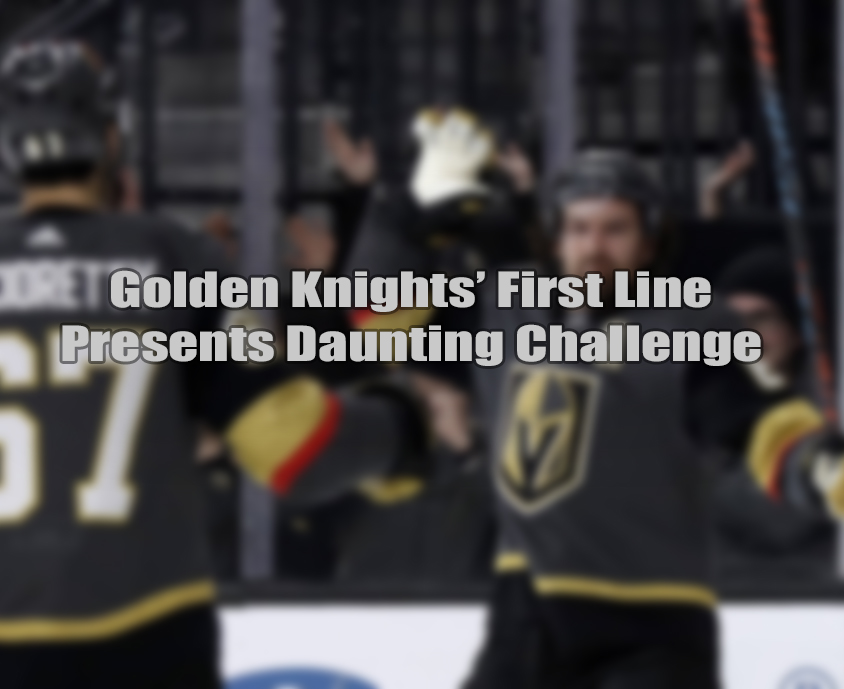 Pete DeBoer might have discovered his No. 1 line by accident.


The Golden Knights coach adjusted his lines during the NHL All-Star break with center William Karlsson out with an upper-body injury. He reunited center Chandler Stephenson, left wing Max Pacioretty and right wing Mark Stone and watched them play well over a five-game span.


The combination might have planted an idea in DeBoer’s head when Karlsson returned. Stephenson showed what Pacioretty and Stone could do with a speedy center between them. So the coach doubled down on that concept by giving them an even more dynamic middle man: Karlsson.


Thus, potentially one of the best lines in hockey was born. It’s a group that could do damage throughout the Stanley Cup playoffs if DeBoer reunites them.


“Just names on paper, that’s a legitimate No. 1 line,” DeBoer said. “(Pacioretty) and Karlsson are speed guys. (Stone’s) one of the smartest players on the ice every time he steps out there. It’s a nice combination.”


The trio debuted Feb. 11 against the Minnesota Wild. Then, for the next eight games, they hit the NHL like a tornado.


Karlsson’s speed gave Pacioretty and Stone plenty of time and space to operate. It also got their forecheck started faster. That’s deadly because the two wings, the Knights’ top scorers, barely need any help to begin with.


“(Karlsson) does everything,” Stone said. “(He’s a) swiss-army knife, (He) kills penalties, goes on the power play, scores goals, plays defense. (He brings) a lot of different elements to the line.”


DeBoer said he’s seen combinations that look great on paper not translate to the ice. But that hasn’t been the case with Karlsson, Pacioretty and Stone.


They found a way to work together without sacrificing what makes their individual games special. Karlsson’s defense and speed get plays started. Stone’s passing and hockey IQ set up chances. And Pacioretty, who possesses one of the NHL’s best snap shots, can finish.


The group had a 66.7 expected goals percentage — a scoring projection based off shot data — in its eight games together, according to MoneyPuck.com. The three were expected to score almost four goals per 60 minutes and allow less than two. Those numbers are special.


Only the Carolina Hurricanes and Minnesota Wild had lines with a higher expected goals percentage.


“I thought we had something good going before this break,” Karlsson said. “We’ve got a good shot of being a really good line.”


The key is recapturing that magic. The three skated together at the beginning of training camp, but Pacioretty then suffered a minor injury. He missed the team’s exhibition and three round-robin games and arrived late to the NHL’s secure zone in Edmonton, Alberta.


It’s not a given DeBoer will reunite them immediately. But if he does, the group has a chance to be a nightmare for opponents.


“You never know how guys are going to complement each other when you write down names on a piece of paper,” DeBoer said. “It might look like it’ll work and a lot of times it doesn’t. I really like how those guys looked.”