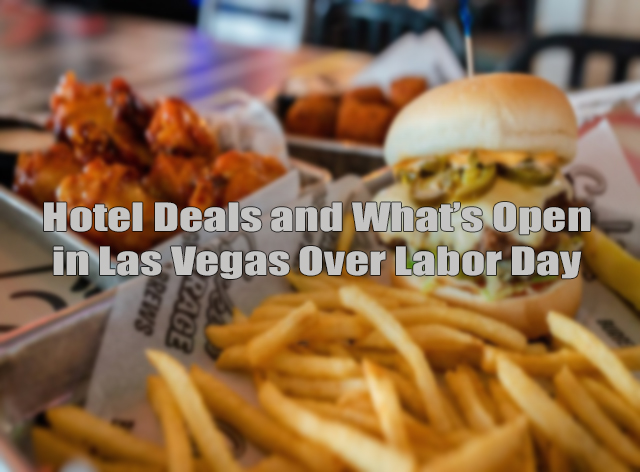 Last-minute travelers heading to Las Vegas for Labor Day weekend will find most resorts open and hotel deals starting at more than $100 a night. Bars without food service and the city’s signature shows remain closed because of the COVID-19 pandemic.


Vegas continues to try to recoup some of the revenue lost when resorts statewide were closed for nearly three months. In July, the city notched more than 1.4 million visitors, higher than June’s numbers but still 61% lower than the same month last year.

What can you expect to spend for a room this weekend? Midrange resort Harrah’s offers rooms starting at $129 a night with a three-night minimum stay. A Saturday night stay at Luxor costs $169.


Upscale properties continue to command premium prices. Rooms at Caesars Palace start at $289 a night for a Friday night arrival for two nights (Saturday arrivals are not allowed).


Wynn Las Vegas has a buy two nights, get one free offer available through Sept. 10. That averages $279 a night for arrivals Friday and includes a $75 credit.


The Tropicana however, has postponed its reopening date. Reservations are being accepted beginning Sept. 17, with rooms from $39 a night.

Wynn: Guests who wait until next week to visit can see the Sept. 10 debut of Wynn’s outdoor show at the Lake of Dreams. The resort spent $14 million to create the show, which features animatronic birds and a frog as well as digital displays beamed onto a waterfall.


You can see the show for free from a terrace (it holds dozens of people with room for social distancing). For a closer look, visitors can book a table at either Lakeside or SW Steakhouse or enjoy the show over a cocktail at Parasol Down, a lounge between the two restaurants.


Sickies Garage: Restaurants in Vegas are open for in-room dining and takeout service. Sickies Garage, a new family-friendly eatery that serves 50 types of hamburgers and 25 varieties of wings, including ones coated in peanut butter and jelly, is opening at the Town Square dining, entertainment and shopping district, about three miles south of the Strip on Las Vegas Boulevard.

The majority of the 30-some resorts along the Strip are now welcoming guests despite the continuing coronavirus outbreak.


Mirage: The Mirage was the most recent site to reopen, at the end of August. As at other properties, the hotel, casino and pools will be open, but other accommodations will be limited. Only a portion of the resort’s restaurants, led by Tom Colicchio’s Heritage Steak, will welcome diners, but hours and days of operation may vary. The popular Secret Garden & Dolphin Habitat, founded by magicians Siegfried and Roy 30 years ago, will once again delight visitors.


Park MGM: Only Park MGM and its hotel-within-a-hotel, NoMad, remain shut. “We are continuing to evaluate business demand and market conditions to determine when we will open our properties,” Jenn Michaels, an MGM Resorts executive, said in a statement. “Our hope is to have Park MGM open by the end of the year.”


Caesars: At Caesars Entertainment, two and a half of its resorts on Las Vegas Boulevard — the Cromwell, Planet Hollywood and the hotel portion of the Linq — show no sign of opening soon.


“Caesars will open its remaining Las Vegas properties in line with customer demand, regulatory requirements and any additional health and safety considerations,” a spokeswoman said in a statement.


Food tours: Lip Smacking Foodie Tours was created a few years ago to lead small groups of people on tasting visits to various restaurants. Since the pandemic, founder Don Contursi added self-guided tours. “I don’t want to see people sitting around saying, ‘Why did we come to Las Vegas? There’s nothing to do,’” he said.


The new tours send guests on visits to downtown eateries in Fremont East and the Arts District. The third takes people to Chinatown along a stretch of Spring Mountain Road known for restaurants featuring cuisines from around the world. “The Chinatown tour is a tour of the hottest, off-Strip restaurants,” Contursi said. “Chefs are opening up [there] because it’s close to the Strip.”

The future of two well-known, off-Strip resorts — Rio, a Caesars property, and Palms, a Station Casinos property— are also murky. Both are located along Flamingo Road west of the 15 Freeway.


Palms last year completed a splashy $690-million makeover, touted as the most expensive renovation in Vegas history. It included a huge sculpture called “Demon With Bowl” by Damien Hirst in the pool area and other Hirst works, including two bull sharks suspended inside a tank filled with formaldehyde.


“Palms is currently undecided whether we are going to open it right now,” chief executive Frank Fertitta said in an early August earnings call. Much of the resort’s large collection of pricey artwork is on loan from the Fertitta family.


Le Reve: If you haven’t seen “Le Reve,” the Cirque-like, water-themed show at Wynn Las Vegas, it’s too late. The cast and crew totaling 275 people were told late last week the show would not reopen and their jobs would be cut.


In a statement, Wynn officials blamed “the COVID-19 pandemic and subsequent physical distancing requirements for which an end date cannot be predicted.” Since 2005, the show has been performed 6,000 times.


“‘Le Reve’ is a barometer for similarly scaled shows,” said John Katsilometes, an entertainment columnist for the Las Vegas Review-Journal. “I think that’s gotten a lot of people nervous in Las Vegas.”


Katsilometes said it was unclear when there would again be a market for high-end entertainment such as “Le Reve” and Cirque du Soleil. He does, however, expect Cirque’s shows to slowly reopen. “We’re still dealing with a kind of value customer in Las Vegas right now, the drive-in crowd who are looking for a bargain,” he said.