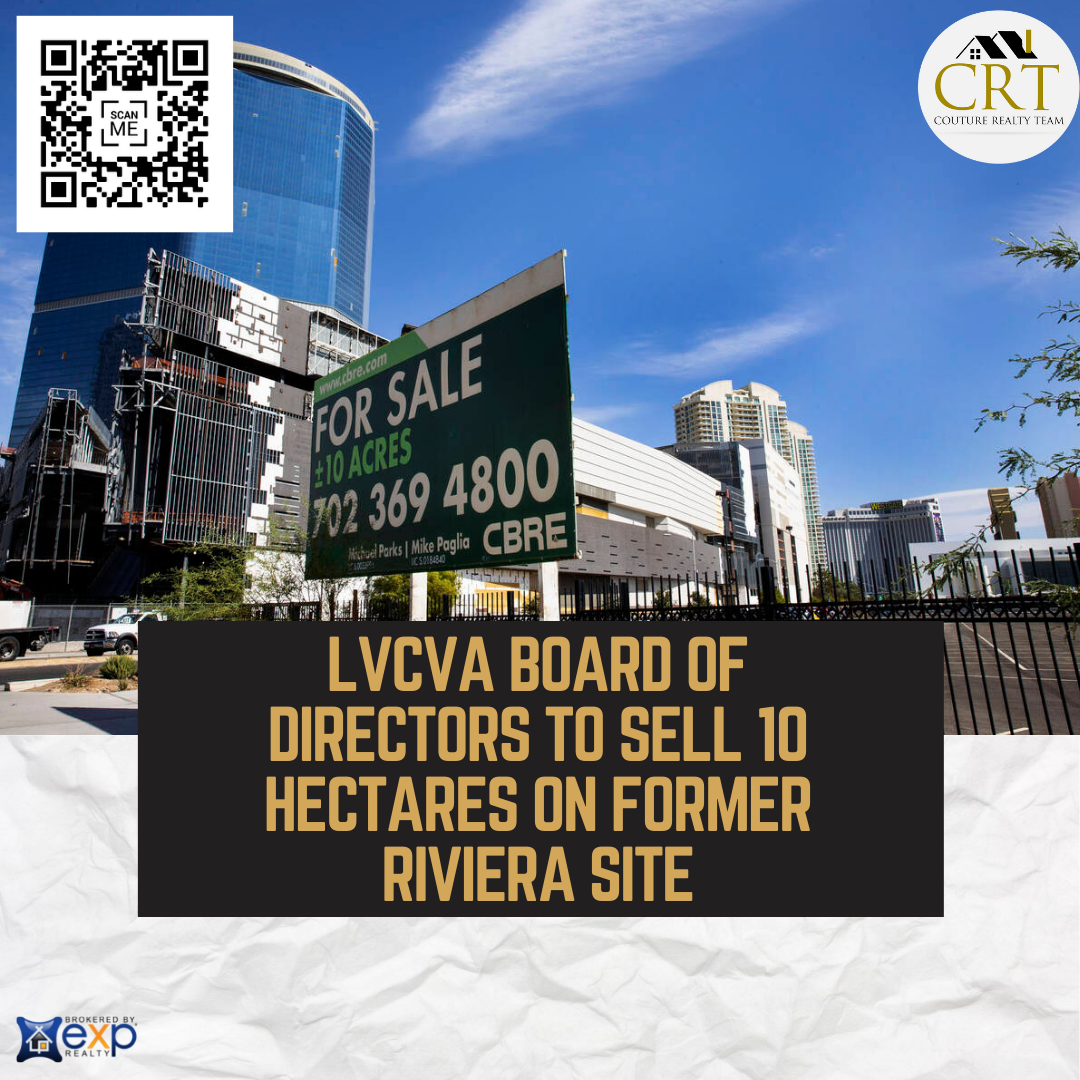 The Las Vegas Convention and Visitors Authority is set to enter into a $120 million deal to sell 10 acres of Stripfront property where the Riviera was located.


The LVCVA’s board of directors on Tuesday is scheduled to consider selling the land at the southeast corner of Las Vegas and Elvis Presley boulevards, across from the long-stalled former Fontainebleau tower, to CB Investment SpA.
Efforts to confirm anything about the buyer, including who is behind the entity, were not immediately successful Monday. LVCVA executives indicated they would provide more details about the buyer at Tuesday’s meeting.
The lucrative land sale would come as Las Vegas’ tourism industry, the backbone of the local economy, continues to bounce back from the pandemic-sparked plunge in visitors. It also comes as the north Strip, for years a quiet stretch of the resort corridor, starts gaining momentum, and as the tally of big-money real estate sales on Las Vegas Boulevard accelerates.
Money for renovations
Terms of the LVCVA deal call for the north Strip property to be developed as a resort or hotel and prohibit any other use. The convention authority also would have the right of first refusal if CB Investment wants to resell the land.
Terms of the sale require the company to begin construction by Jan. 1, 2031, with completion by Jan. 1, 2034.
The sale is part of a long-term plan the LVCVA has had to finance its renovation of four convention halls once the new West Hall was completed.
The massive decline in revenue resulting from the shutdown of the convention industry by the coronavirus pandemic has resulted in the delay of the renovation of the Las Vegas Convention Center’s North, Central and two South halls.
LVCVA leaders knew they needed around $500 million to fund the renovation of the other exhibit halls and that there were restrictions on tax-exempt bonds used to acquire the Riviera.
The land sale is expected to close by June 30, but that could be pushed to Oct. 31, 2022, if the buyer pays $3 million to extend it. The LVCVA also retained the right to use the land, for a fee, until April 30, 2023, for parking, outdoor exhibitions or access to a planned connection at Resorts World for the Boring Co.’s underground-transit system.
Hotel implosions
LVCVA officials had thought about selling the plot since at least February 2019, when President and CEO Steve Hill informed the board and later told a breakfast meeting of NAIOP, a commercial real estate association, that the agency would look to sell about 10 acres of the former Riviera site.
At the time, Hill did not offer an estimate on how much the parcel could be worth, and he said agency officials were just starting to think about how to shop it around, though he thought it would fetch top dollar.
“It may be the most valuable piece of property that a government agency has ever sold,” Hill told the Review-Journal at the time.
Brokerage firm CBRE Group announced in March 2019 it had been hired by the tourism agency to sell the property. No asking price was given.
The LVCVA, under then-chief Rossi Ralenkotter, had bought the Riviera in 2015 for $182.5 million, acquiring the 26-acre site for Las Vegas Convention Center expansion space.
It imploded the resort.
The LVCVA’s convention space west of Paradise Road is actually on two storied resort sites — the Riviera and the Landmark.
The agency purchased the 20-acre Landmark site in 1993 for $15.1 million. That hotel’s implosion, in 1995, was featured in the 1996 movie “Mars Attacks!”
The convention authority also acquired two nearby parcels in 2018 for $63.3 million for additional convention parking and to better situate the nearly $1 billion West Hall on the site.
Strip real estate
Locals have long hoped the north Strip would see a burst of foot traffic and commerce, given the multiple project plans on or near that stretch of the boulevard. The convention center’s 1.4 million-square-foot expansion opened in June, and the $4.3 billion, 3,500-room Resorts World Las Vegas debuted that same month.
But other proposals for the area have come and gone or stalled.
Among them: Developer Steve Witkoff bought the unfinished Fontainebleau in 2017, renamed the property Drew Las Vegas and set out to finish the 60-plus-story megaresort.
But he shelved construction after the pandemic hit, and the Fontainebleau’s original developer reacquired the property early this year through a process that lets people avoid foreclosure, with no word on when construction would resume.
Meanwhile, the Strip also has seen a burst of lucrative property deals lately.
MGM Resorts International said last month that it closed its nearly $3.9 billion sale of the Aria and Vdara resorts to financial conglomerate Blackstone and leased them back. The announcement came a day after Blackstone said it is selling The Cosmopolitan of Las Vegas for $5.65 billion.
As part of that deal, MGM is acquiring the Cosmopolitan’s operations side for more than $1.6 billion and leasing the hotel-casino from a group of landlords.