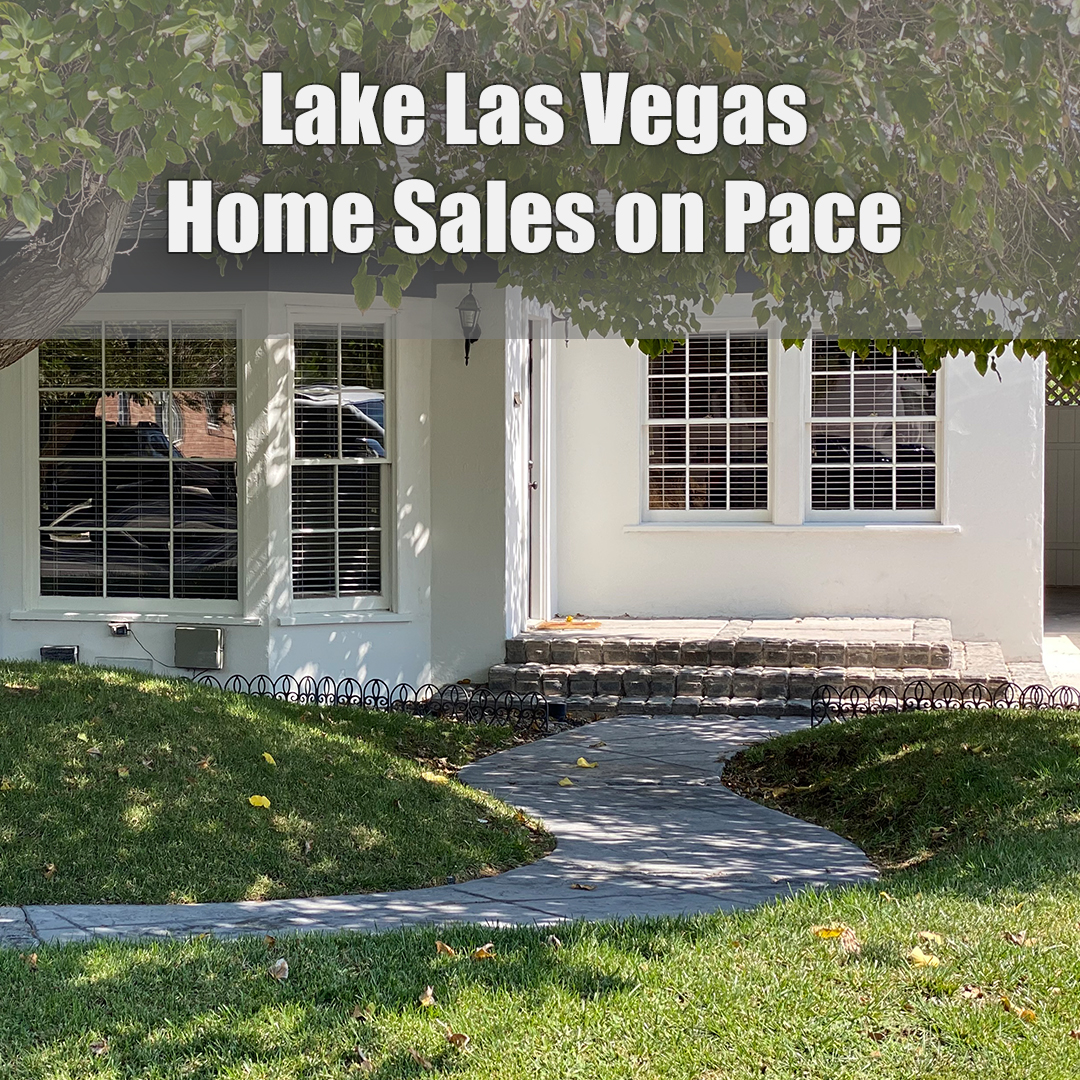 The global pandemic and desire for more space and isolation appears to have benefited Lake Las Vegas in a strong way in 2020 and the lakeside community is on pace to have its best year since before the Great Recession more than a decade ago.

The 3,600-acre east Henderson resort community with a 320-acre man-made lake, golf courses, hotels and retail village recorded the biggest growth rate of any long-standing master-planned community when it comes to sales of new homes between July and September.

The 85 sales in the third quarter were three times the 28 in the same three-month period of 2019, according to Las Vegas-based Home Builders Research.

A strong summer bolstered Lake Las Vegas to 191 sales through the end of September (the most recent period available). That’s up 45 percent over the first nine months of 2020. There were 132 sales from January through September 2019, Home Builders Research reported.

Lake Las Vegas reported that through Nov. 11, it has sold 221 new homes and custom lots and expects to end the year with 275 to 300 sales as it launched new models and communities. It sold 192 homes and lots in 2019.

“People are looking for a quiet place to rest, and we’ve been very lucky” said Pat Parker, the president of RainTree Investment Corp., the master developer of Lake Las Vegas. “The world we live in is complex, and sometimes you just want a place to relax. There’s a lot of concern about getting COVID-19 so having open space and being outside is very attractive to people.”

Parker said they noticed that trendline starting in mid-May to June 1 when Nevada and other states started to reopen.

“We knew that something had been moving positively that people were coming,” Parker said. “The number of people visiting had gone lower, but the conversion rate went far higher. Real buyers were coming. They were very serious, and they purchased.”

Nothing epitomizes what’s happening than the sale in September of an 8,800-square-foot waterfront home for $6.5 million, the highest price paid for a home in Lake Las Vegas since 2007. A Southern California couple with a business and family acquired the home. Gene Northup of Synergy/Sotheby’s International Realty was the listing agent.

Luxury builder Blue Heron has sold 35 of 37 in its new community Vantage with a starting price of more than $800,000.

Parker said it was not only the result of coming out of the pandemic, but Lake Las Vegas was well-positioned with a new variety of product lines that came together at the same time.

Pulte Del Webb opened its first Southern Nevada age-qualified community in more than a decade at Lake Las Vegas this year with planned sales of 460 homes. Some 78 homes have been sold, and those prices range from $407,880 for 1,579 square feet to $576,880 for 2,736 square feet. Construction on the clubhouse has just begun.

“We got lucky that we expanded the product line at the right time,” Parker said. “That was a good time for the pandemic and folks moving from California. We rebuilt the community for this moment, which was to prepare homes at a bunch of different price points from more than $300,000 to $6.5 million. We have miles and miles of walking trails. People wanted to be outside during the pandemic. We provide that active lifestyle. Not too many places have it.”

Parker said they’ve heard from buyers who said they’ve been watching Lake Las Vegas for years, always loved it, and now want to move there. But it was the pandemic that gave people the impetus to make the decision, he said.

“They didn’t want to miss out,” Parker said.

Some 50 to 55 percent of buyers are coming from California. Thirty percent are coming from Nevada and the remainder come from colder climates such as Chicago and Pacific Northwest. Many of the Las Vegas buyers are Henderson residents who want to move up, Parker said.

“They’re people who live in Green Valley or Anthem and probably been there for 15 years, plus,” Parker said. “The equity has returned to their homes, and they want to live in the beauty of Lake Las Vegas, or so they tell us.”

The people relocating from Southern California will be full-time residents. Some have children in high school or just out of high school and who see an opportunity to buy a home with a view or (that) has modern architecture, Parker said.

“They’re moving out of California where their home might be 30 years old,” Parker said. “They would rather buy a new home in Nevada and get all the amenities than remodel their home in California.”

“I don’t see anything stopping us,” Parker said. “We’re seeing the Californians moving over, the Nevadans moving up and it’s about the sports club and (two) golf course and active lifestyle amenities. I don’t think there is any place like it.”

Four new communities will be opening in the next two months.

“Caliza is the most exciting,” Parker said. “It’s a Blue Heron community (with 27 homes on the Northshore that overlooks the lake). It’s the move-up after Vantage sells out. It will start at 5,000 square feet and go up to 7,000 square feet. They will be from $1.3 million and up. That’s a very modern architecture and exciting. It’s taking reservations now.”

Varrena by Woodside Homes will have 38 single-story homes with views of the Strip starting at $470,000. They will measure about 1,900 square feet and models will open in about two weeks, Parker said. It’s at the front of Lake Las Vegas and overlooks 25 acres of open space.

Armano by Lennar Homes has 93 lots with views of Lake Mead and Reflection Bay Golf Course in Northshore. The single-story homes will see models go up in about two weeks. The homes measure 1,800 square feet to 2,100 square feet.

Reverie by Lennar Homes has 105 homes. It is situated along Lake Las Vegas Parkway. The two-story homes have views of the Strip with prices in the low $400,000s. Models will start in December.