May 2020 Monthly Housing Market Trends Report: Key Housing Indicators Begin to Turn Around in May

May 2020 Monthly Housing Market Trends Report: Key Housing Indicators Begin to Turn Around in May


The inventory of newly listed properties declined by 29.4 percent over the past year, and 28.6 percent in large markets


Nationally, homes sold in 71 days in May, 15 days more slowly than last year


Realtor.com®’s May housing data release reveals that the U.S. housing market likely reached its low point during mid-April, with constrained new listings and minimal price growth. Signs of recovery emerged, as yearly declines in newly listed inventory slowed and listing prices recovered. However, despite many positive trends, COVID-related challenges linger, as homes were on the market more than two weeks longer than this time last year.


The total number of homes available for sale continued to be constrained in May. Nationally, inventory decreased 19.9 percent year-over-year, a faster rate of decline compared to the 15.3 percent year-over-year drop in April. This amounted to a loss of 255,000 listings compared to May of last year. The volume of newly listed properties in May decreased by 29.4 percent since last year. While still well below last year’s levels, the rate of decline in newly listed properties has improved from a decline of 44.1 percent year-over-year in April, signaling that sellers are starting to return to the marketplace, which is needed to restore inventory levels to healthy market conditions


Housing inventory in the 50 largest U.S. metros declined by 21.9 percent year-over-year in May. This is an acceleration compared to the 16.0 percent year-over-year decline in April. The metros which saw the biggest declines in inventory were typically those hardest hit by COVID-19, such as Philadelphia-Camden-Wilmington, PA-NJ-DE-MD (-38.6 percent); Providence-Warwick, RI-MA (-35.8%); and Baltimore-Columbia-Towson, MD (-34.5%). This month, none of the largest 50 metros saw an inventory increase on a year-over-year basis and 43 out of 50 saw greater inventory declines than last month. However, 45 out of the 50 markets saw the yearly decline in newly listed properties improve somewhat since last month.


Homes continue to sell more slowly than last year due to stay at home orders and modified behavior resulting from COVID-19. Nationally, the typical home sold in 71 days in May, 15 days more slowly than May of last year. In the 50 largest U.S. metros, the typical home spent 58 days on the market, and homes sold 13 days more slowly, on average, compared to last May. Last month, the increase in time spent on market was more apparent in the 50 largest metros. This month, it appears that the nation’s largest metros have improved relative to the national rate. Among the larger metropolitan areas, homes saw the greatest increase in time spent on the market in Buffalo-Cheektowaga-Niagara Falls, NY (+34 days); Pittsburgh, PA (+33 days); and Detroit-Warren-Dearborn-MI (+32 days); among other areas that have been particularly hard-hit by COVID-19. 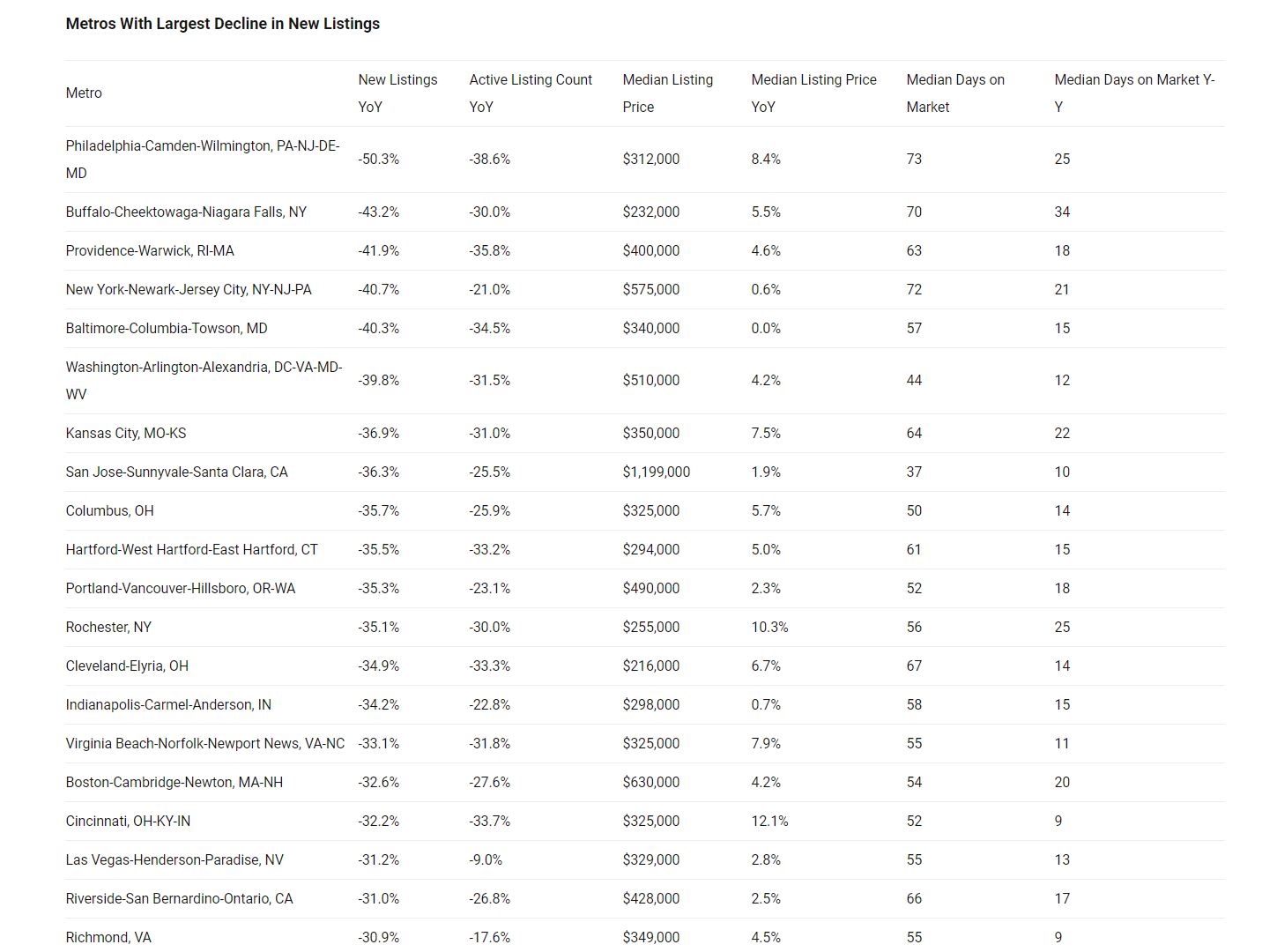 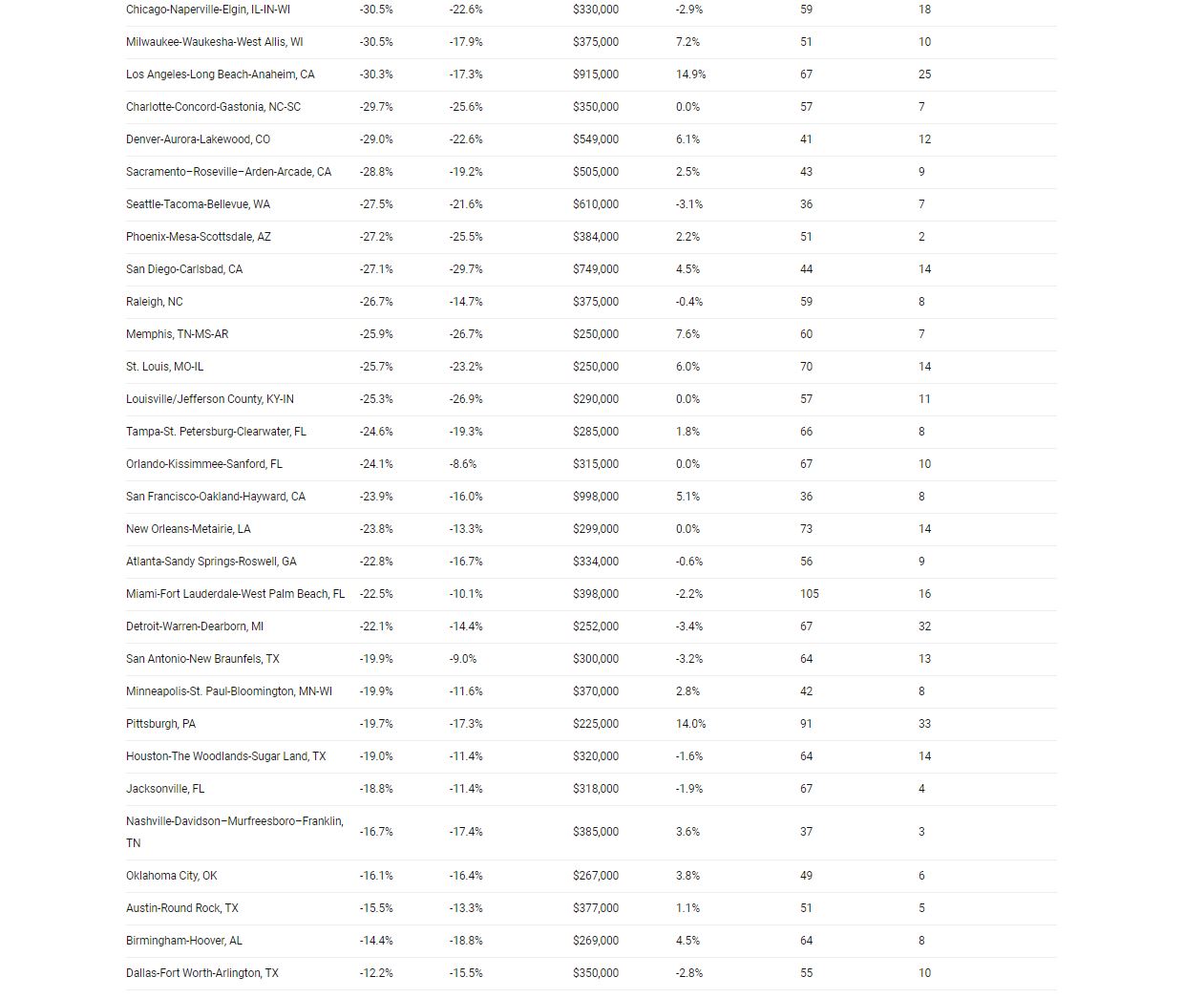