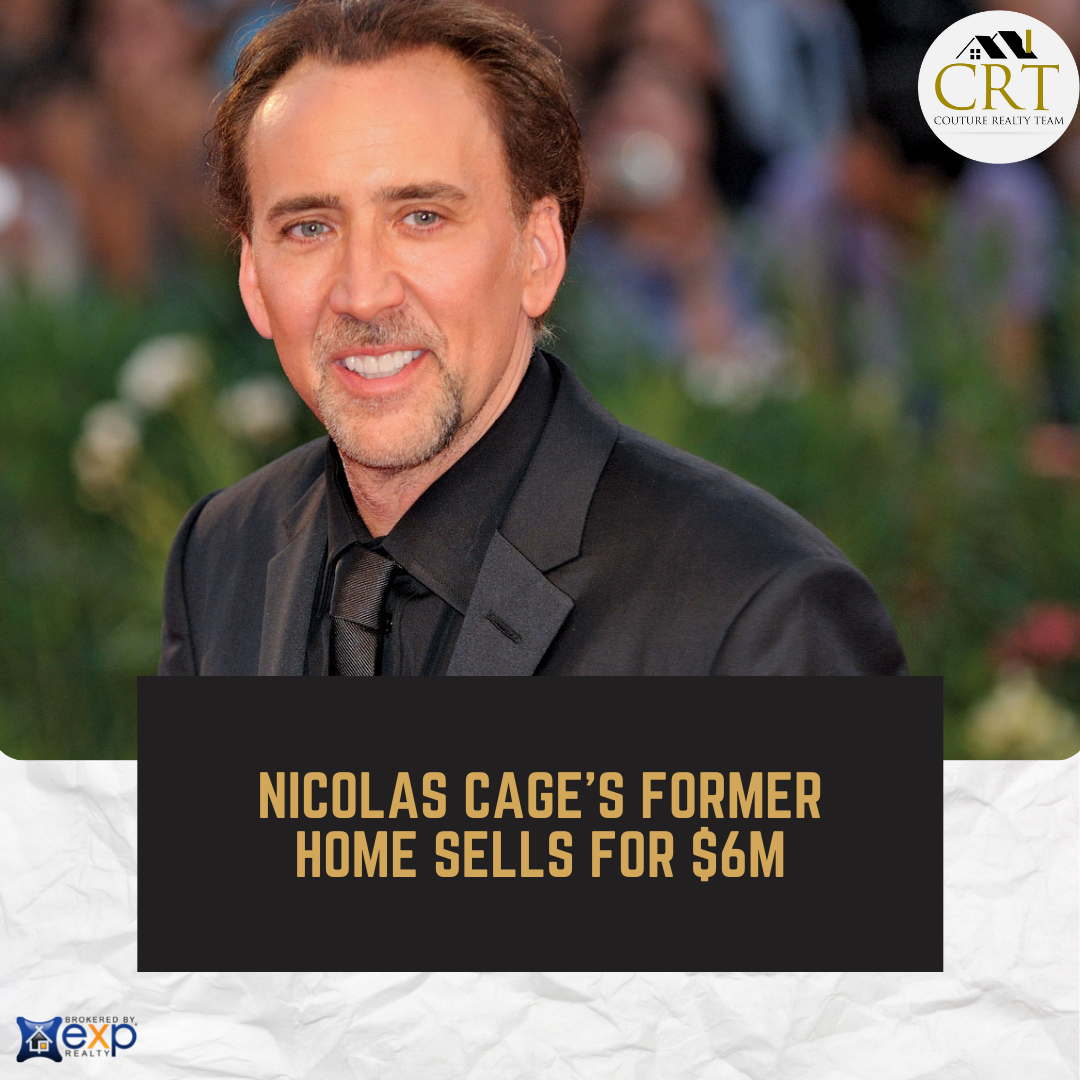 Nicolas Cage's former home in Spanish Hills almost becomes his new treasure, but instead he leaves his Las Vegas past behind.


Cage, the star of "Leaving Las Vegas" and "National Treasure," visited his old home on Spanish Heights Drive twice, but another buyer paid $ 6 million for the house. has 0.36 acres of farmland. The old house in the valley southwest of
Cage marked the second-highest price paid for a house in Las Vegas in July. This home is only eclipsed by the $ 10.5 million paid for a home in Ascaya's luxury hillside community, Henderson, where KISS rocker Gene Simmons will be their new neighbor. Simmons bought a house this summer in Ascaya.


Cage bought the house in the Spanish hills in 2006 for $ 8.5 million, but lost it to foreclosure during the housing crisis, as many others in the valley did. It was sold in 2010 for $ 4.95 million.
When the home returned to the market in 2020, Susie Perrine, broker, and owner of Las Vegas International Realty, a Nebraska-based sellers agent, said Cage visited the home twice to see the property consider buying it back. . One of those visits was in January with his fifth wife, Riko Shibata, 26, whom Cage married later in February in Las Vegas. Cage was married to his third wife, Alice Kim, when he owned the house in the Spanish Hills.

“He came back to look at it a few times this past year to consider it, and he was so excited to see it and talking about all the good times he had there,” according to Perrine, who declined to describe the couple’s interactions after they saw it together.

In addition to seven bedrooms, the two-story home built in 2003 has 11 bathrooms, a commercial elevator, 10-car garage, media room, office, game room, and a 3,000-square-foot master suite overlooking the valley. The master bathroom has a steam and sauna. A basement has luxury finishes, kitchenette staff quarters, and a game room.


“The house features the best view of Las Vegas,” according to Perrine who managed the property for nine years.
The home was bought by Randy and Sarah Greenberg of Southern California. She represented herself as the Realtor in the transaction.
Perrine said she had a lot of buyers from Southern California interested in the home, including Simmons before he bought in Ascaya. Perrine said Simmons wanted a newer home and not one he had to remodel.
There were other entertainers interested in the home as well, she said. Perrine said the home is so popular that she has a buyer willing to pay the new owners $1 million more than they paid.
“Spanish Hills not only has the best view of Las Vegas, but it is so close to the Strip,” Perrine said. “It’s right around the corner from the freeway.”
Perrine, who’s been a Realtor for more than 40 years, said she’s never seen a luxury market like this in Las Vegas. “It has been unbelievable,” Perrine said. “I live in Spanish Trails and never in the history of Spanish Trails have we ever had so many sales. We have had a record-breaking year and most everybody is from California.”
Ascaya home sells for $10.5 million
Luxury Realtor Kristen Routh-Silberman with Synergy Sotheby’s International Realty was the listing agent in the sale for a $10.5 million home designed by Las Vegas architect Richard Luke. It was built in 2020 and sits on a half-acre.
The two-story home measures 10,030 square feet with seven bedrooms and five baths. It has a four-car garage, 10-seat movie theater, billiard room, game room, wine and whisky bar, glass wine cellar, office, outdoor kitchen, infinity pool, and spa.
“It’s a flawless modern home,” Routh-Silberman said. “It’s very glamorous and stunning. It has all the bells and whistles but the pièce de résistance is that every single bedroom in the house has a Strip view. Every room on both stories has a Strip view except for the theater and garage. The dining room, living room, great room, billiard and game room, bar and even the wine cellar have Strip views.”

Emily Sherwood with Windermere Prestige Properties represented the buyer, Robert and Jean Ann McCoy, who relocated to Ascaya from Southern Highlands. The sellers were Iqbal and Farzana Hussain, who are building a home in MacDonald Highlands in Henderson. Hussain is a local business owner.
Las Vegas luxury market
The latest numbers collected by Forrest Barbee, the corporate broker at Berkshire Hathaway HomeServices, Nevada Properties, shows there were 166 sales of condos and homes of $1 million and higher in Southern Nevada. That falls short of the record of 172 in March.
For the year through July, there have been 1,023 luxury sales, blowing past the record of 825 in all of 2020. There were 183 luxury sales pending at the end of July.
The average price of properties sold in July was $1.95 million, up from $1.73 million a year ago. Properties that sold sat on the market for 58 days compared to 105 days a year ago, according to Barbee. There’s a four-month inventory of luxury homes, down from 10 months a year ago.
Routh-Silberman said she hasn’t seen any signs of a slowdown in the luxury market. She normally doesn’t have open houses in August when it’s so hot but had one in MacDonald Highlands last week that had 26 qualified buyers for the home listed for $8.75 million.
“It’s hard to get 26 qualified buyers in the spring and fall let alone on a 100-degree day with smoke (from wildfires) in the air,” Routh-Silberman said. “That house is not going to last long.” Routh-Silberman said she expects to close soon on another home in MacDonald Highlands for $12.25 million.
She said the escalation of COVID-19 cases with the Delta variant may spur even more relocations to Las Vegas and cause local residents to put their homes on the market to change their living arrangements.
“This is the busiest July and August I have seen in the last 10 years,” Routh-Silberman said. “I expect more houses to come on the market in the fall. We’re tilted more toward the seller’s market because there isn’t as much inventory or the inventory moves fast. But everybody gets their house ready during the summer to go on the market in the fall because fall and spring are traditionally our best times.”
Luxury Realtor Ivan Sher with the Ivan Sher Group of Berkshire Hathaway HomeService said he’s seen a slight slowdown in July and August because of the heat but expects a strong finish to 2021.
“I expect the fourth quarter to be phenomenal,” Sher said. “I expect California to realize that (Gov. Gavin Newsom) did not get recalled and that they have very little option from a financial standpoint and socio-economic livability standpoint. Vegas is definitely the closest and cost-of-living is a fraction of what it is in California.”
Anthony Spiegel, a broker-salesperson with Berkshire Hathaway HomeServices Luxury Collection, said the luxury market continues to be amazing. Over the last decade, Las Vegas has sold 190 homes priced at more than $4 billion, but half of those happened in the last 18 months.
The average list price in July was $2.85 million, up from $2.5 million a year ago, according to Barbee. Nearly 600 homes and condos priced $1 million and above were on the market through the end of July, according to Barbee. It was 631 a year ago through the end of July.