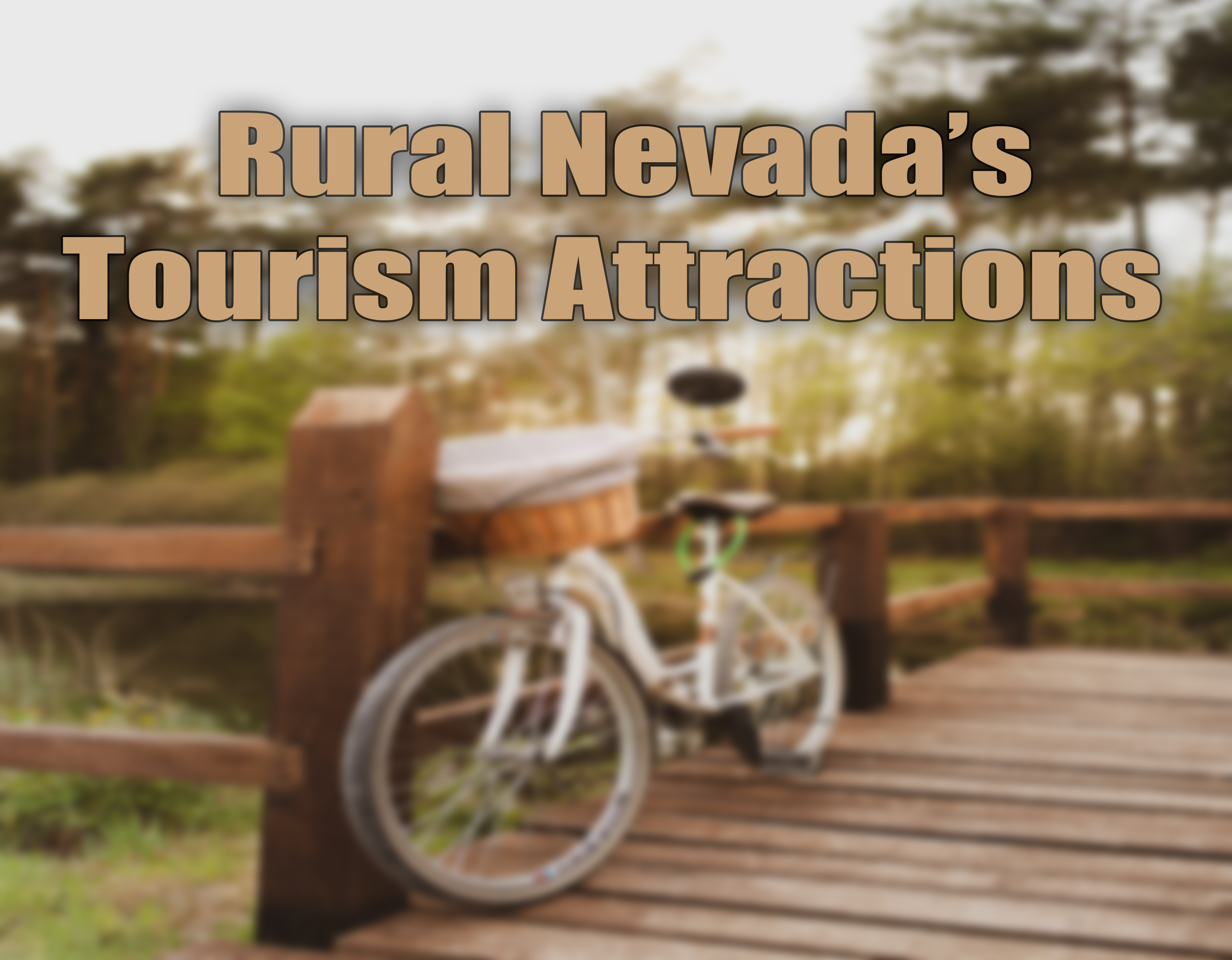 Travel Nevada is counting on state residents to explore nearby and spend their money within the Silver State in the months ahead.


And some rural businesses are already seeing just that.


Nearly five months into the pandemic that has kept many from venturing to local businesses and traveling at all, many rural attractions are seeing better-than-expected results so far — that is, they are surviving.


They’re finding unexpected revenue in different segments of their business. They’re seeing people continue to travel to Nevada’s hinterlands where social distancing is no problem in the hundreds of miles of open space. And, they’re watching people discover the outdoors as a safe haven from the crowds and social distancing in the cities.


Visitation to rural Nevada has fared better than expected, based on hotel room tax collections.


While hotel room tax collections were down 96 percent in Clark County (Las Vegas) and 81 percent in Washoe County (Reno), they were off only 57 percent outside of those population centers in May, according to Travel Nevada.


Brenda Scolari, director of the Nevada Department of Tourism and Cultural Affairs, which oversees the Travel Nevada brand, said it will be important for residents of Clark and Washoe counties to discover what road trips are near their homes, saying many don’t know what attractions are close by.


“I think that’s common. It’s sort of a travel reflex,” she said. “When you think of travel, you think of going away and you quite often don’t even consider your own state first. Right now, we’re really focused on keeping spending in state to boost the economy.”


Scolari and the department she leads recently launched the staycation-focused “Discover Your Nevada” marketing campaign, an effort to persuade residents to explore all corners of the nation’s seventh largest state.


“‘Discover Your Nevada’ will benefit everyone in the state because we’re going to focus on one community at a time,” said Scolari, a fourth-generation native Nevadan from Reno. She began leading the agency a couple of months before the coronavirus sank its teeth into the nation.


“It’s a campaign that speaks to residents about supporting their communities,” she said. “We’re going to inform them of what’s available in their comfort zone of travel.”


Based on some experiences for rural attractions, many Nevadans already have gotten the message. But because of the health and safety restrictions imposed on businesses, those attractions aren’t in the financial clear just yet.


Chad Taylor, director of sales and marketing for Lake Mead Mohave Adventures, a concessionaire for Lake Mead National Recreation Area, is the parent company of Black Canyon River Adventures, which runs raft trips on the Colorado River below Hoover Dam.


But Black Canyon River Adventures has been shut down since March and will remain closed for the foreseeable future during prime rafting season. It’s virtually impossible to promote safe social distancing aboard the 35-foot motorized rafts that usually hold up to 14 passengers.


Taylor said what’s worse is that it was shut down during the opportune spring and fall convention seasons, which were wiped away by the pandemic. People in town for trade shows and conventions usually represent about 80 percent of raft passengers, he said. The river tours provide team-building and recreational events for corporate groups attending their shows.


Taylor said the rest of the company — which oversees houseboats, marinas, camping and recreational vehicle parks — are doing just fine.


“Customers are mostly locals or people from within a five-hour travel radius,” he said. “We have maybe 3 million people in the area, and maybe 30 percent of them knew there was a lake out here and an outdoor recreation area with seven properties on the lakes. Now, more of them do.”


Stays at the Mizpah


John McCormick is general manager of the Mizpah, a historic 47-room, five-story hotel in Tonopah that once was the tallest building in Nevada.


Owned by Californians Fred and Nancy Cline, the Mizpah was closed for about a month as a nonessential business, providing an opportunity for a spruce-up, fresh coats of paint in the rooms and carpet cleaning.


“While we have not returned to our normal business, it is better than what I had expected,” McCormick said. “We hear from some of the guests that they were cooped up at home and just wanted to get out and came to stay with us.”


Some of the hotel’s guests seek it out because of the colorful ghost stories emanating from the property, while others see it as a natural halfway stop between Las Vegas and Reno.


While the Mizpah is holding its own, business is good enough that the Clines are going forward to finishing their next project — renovating another historic hotel across the street.


“The Clines have been working on renovating the Belvada in the past couple of years,” McCormick said.


That hotel is close to opening its 40 rooms, lobby and “a couple of retail outlets that we haven’t decided what we’re putting in just yet.


“The end of September would not be out of reality or early October,” he said. “It’s just a matter of getting the ball in the end zone.”


Izzy Collett, owner of Boulder City-based Desert Adventures, which rents kayaks and canoes for use on the river below the dam and Lake Mead, discovered an unexpected revenue source — sales of equipment and not just rentals.


“Retail sales have gone through the roof,” Collett said. “We’ve sold large numbers of kayaks and canoes. It’s gotten that we can’t keep product in stock because all our manufacturers are behind.”


As for the rental side, Collett said Southern Nevadans are embracing water sports like never before, even though she hasn’t created any new marketing pitches.


“We’ve been trying to get the local market out here for a really long time,” she said. “I think they’ve finally discovered it. Anyone can do it, and it’s not hard.”


As a result, Desert Recreation’s business model has changed with far more locals than tourists as customers.


“If we didn’t have that local interest, we’d be hurting,” Collet said. “It went from famine to feast.”


The interest by locals in Nevada attractions is music to Scolari’s ears.


Her staff in June released a recovery plan listing strategies to encourage in-state tourism, appealing to Nevadans with a well-tested theme — freedom.


“Travel Nevada’s core value of freedom will hold a new meaning for audiences in the coming year,” a section of the plan says. “Visitors will respond well to the sentiment of freedom and what it represents physically in Nevada: urban playgrounds, open space, vast scenic landscapes, and long winding roads.”


The state’s wide-open spaces provide plenty of room for activity without the troubles of social distancing. Scolari’s favorite getaway place is Kingston, just south of Austin, and near the state’s geographic center. It’s an out-of-the-way destination in the Toiyabe Mountains that defies the common view of Nevada as one vast desert.


Another favorite: the Great Basin Astronomy Festival in Great Basin National Park, near Ely. The Sept. 17-19 event is expected to include telescope observations and night-photography workshops under one of the nation’s darkest night skies.


In August’s Commission on Tourism meeting, a recovery committee was formed and will meet for the first time next month.


One idea, Scolari said, will be to modify the rules for distributing thousands of dollars in marketing grants the commission annually distributes.


“Once larger gatherings are allowed, we are going to allow legacy rural events to apply for marketing grants,” she said. “Normally, those grants are meant only to seed new events. But we’ll allow long-standing events to apply and be awarded because we know they are going to need the assistance to restart.”


She provided examples like the Cowboy Poetry Festival in Elko and Camel Races in Virginia City.


”We’re redefining our grant guidelines to accommodate the world post-COVID,” she said.


Will the strategies work?


“I think all of us in the industry are concerned that we’re going to lose some businesses, and it’s our job to try to underpin their survival to the degree possible,” Scolari said. “Some businesses just can’t survive this length of time without a restaurant or full occupancy and every business defines what its business margins are.”