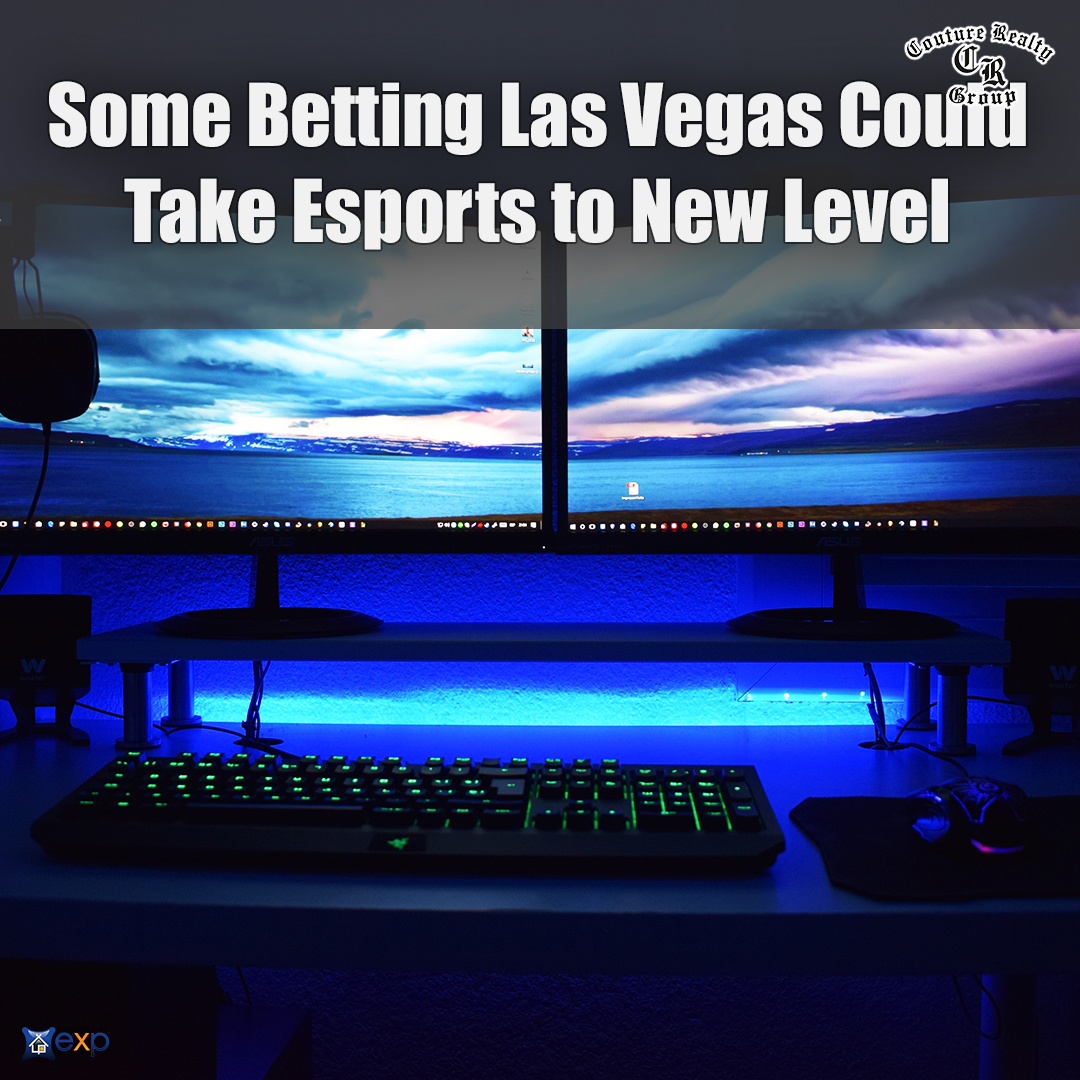 Esports boomed online over the past year. It’s unclear whether that success continues in a post-pandemic world, but experts see renewed possibility for Las Vegas to take esports to the next level.

“Vegas could become the esports capital of North America,” said Milo Ocampo, the founder of Las Vegas-based 8-Bit Esports. The 26-year-old Ocampo, AKA “kuyamilo,” said he first realized Las Vegas’ potential in 2013. “We have the infrastructure set for it in terms of the convention space, the tech is here. And the legacy is essentially here.”

There’s a coin flip’s chance that you’ve played a video game since March.

About 55 percent of U.S. residents played video games during the first phase of the COVID-19 pandemic, according to a recently released report by Nielsen subsidiary SuperData. The same report found that the games and interactive media industry grew 12 percent year-over-year to a $139.9 billion powerhouse in 2020. Streaming reached 1.2 billion people in 2020 and generated $9.3 billion in revenue.

Esports was a booming industry worldwide prior to the pandemic. People spent more than a billion hours watching online streaming platform Twitch in both February and March of 2020, according to data provided by Rainmaker.gg gaming metrics. That number jumped to 1.6 billion in April.

Then the pandemic hit, and people were stuck at home those first few months, looking for something to do.

The lack of competitive entertainment provided esports a window to gain new attention, especially as traditional sports leagues and athletes began transitioning their own competitions online, according to Brett Abarbanel, director of research at UNLV’s International Gaming Institute.

“This just upped the ante and moved everything forward, probably about five years, just in terms of how it might normally have moved up the trajectory,” she said.

Esports reached a wider audience as people sought options for entertainment online. That hasn’t changed with the return of live sports, but its growth pattern has slowed as the U.S. approaches a year of pandemic life.

“That incredible trajectory was not sustainable. It couldn’t just go through the roof forever. Nothing really can,” Abarbanel said. “But we’re still seeing impressive growth and some plateauing.”

Nevertheless, that growth has excited Jud Hannigan, the CEO of Allied Esports. His company owns the HyperX Esports Arena on the Strip, which resumed hosting in-person events June 25 and now holds three or four tournaments per week.

Since the pandemic, the arena has expanded into daily and longer online tournaments to reach a wider audience. Viewership is up 1,000 percent from pre-pandemic levels for some of the arena’s online content, Hannigan said. The company can now pair its online offerings with in-person events, something he sees as a potent combination.

“I think in a post-pandemic world, we’ll start to see people flying in regularly for our events,” he said, “and it’s super exciting for us because we weren’t necessarily there pre-pandemic and now we are.”

Hannigan said the arena’s spring closure provided an opportunity to re-evaluate its offerings. Allied Esports views elevating player profiles as central to its business model. Accordingly, the company converted a domed space between the lobby and the arena into a “champion’s circle,” complete with a 360-degree LED wall highlighting past and current champions, wins and stats.

‘This is gonna happen’

There’s a sense of unmet potential for esports in Las Vegas.

Hotels. Casinos. Arenas. Shows. Entertainment. Bars. Nightlife. Experts say the infrastructure is all there for an esports tourist destination.

Yet, hotel-casinos such as The Linq and Downtown Grand tried cashing in on an expected esports boom a few years ago and have since scaled back. The HyperX arena’s average customer is 16, five years away from enjoying the 21-and-over kind of gaming that drives Nevada’s economy. They may not be old enough to gamble or drink just yet, but they will be soon enough, said Chris LaPorte, founder of Reset Las Vegas, a video gaming consulting company.

Esports are still a new concept, she said last month. League of Legends, one of the world’s most popular competitive games, debuted in 2009. The industry is still trying to figure out what it is. So are the players, let alone the businesses hoping to get in the game for the first time, she said.

The industry’s nascency does have “upside” for Las Vegas, Abarbanel added. There’s room for innovation and definition in a city with plenty of innovators, event space and interest in esports. She pointed to the rapid development of the city into a traditional sports hub.

“In a similar manner, we might be able to play host to a major esports event or attract a game developer to set up its headquarters in Las Vegas,” she said. “We have a lot of opportunity to be a major hub for streamers who want to set up shop, we can innovate in that space, as well, we can have those sorts of talent agencies.”

Esports in Las Vegas “can become something that does grow quite quickly” because groups like the Nevada Esports Alliance never gave up on the possibility, said LaPorte, also one of the nonprofit’s members. Online tournaments during the pandemic have at times struggled with bad internet connections and cheating scandals, he said.

The demand for large live events is real, he said, and makes venues like the HyperX arena all-the-more attractive.

“We’re still here saying, ‘Hey, look, trust us. This is gonna happen,’” LaPorte said. “We have to just figure out what is going to make it work and how to probably align everyone’s needs to ensure that esports is looking at Las Vegas as a place to hold events.”

Nevada’s public and private leaders see renewed opportunity for local esports to reach the next level.

They’ve viewed the industry in recent years as a way to attract a new generation of customers, and diversify and fortify Nevada’s tourism-heavy economy.

A Las Vegas Convention and Visitors Authority spokeswoman said pent-up demand for in-person events will benefit the valley’s venues that host competitions and conferences. The visitors authority is a founding member of the esports alliance.

Video gaming has thrived during the pandemic, and esports’ popularity has provided great opportunity for the valley, spokeswoman Lori Nelson-Kraft said.

“Esports fans have shown great enthusiasm for events held in Las Vegas with our 24/7 action and robust entertainment offerings,” she said. “The esports industry also allows Las Vegas to attract both leisure and business travelers as we can host tournaments as well as (business-to-business) conferences.”

Nevada Sen. Ben Kieckhefer (R-Reno) is drafting legislation that would create what’s thought to be the country’s first government regulating body for esports.

He envisions a “light touch” state oversight group akin to the Nevada Athletic Commission, which regulates combat sports like mixed martial arts and boxing through licensure and sanctions.

Kieckhefer said Nevada has the opportunity to support its most important industries, gaming and hospitality, and establish itself as a global leader in esports.

“I think the general consensus now is that the time has come for something like this,” he said.

Caesars Entertainment Inc. sees signs that esports events will return and is “involved in a number of conversations at present about exciting new events,” said Ty Stewart, senior vice president of World Series of Poker and esports.

Stewart said the company believes in esports and thinks Las Vegas “can and will be the de facto home” for esports competitions and festivals.

“It’s a long regulatory road and most states are focused on sports betting when it comes to iGaming presently, but the potential is significant,” he said.

Nevada currently considers esports wagers as event betting, like wagering on the Olympics, rather than sports betting for the NFL, said UNLV’s Abarbanel, also a director with the esports alliance. Esports betting today requires an application and review process for each event before someone can place a bet, she said. The Nevada Gaming Control Board has approved betting on several esports competitions over the past year.

The valley’s inherent advantages as a tourist destination and an “expedited — or overhauled — approval process” could create a unique esports experience, according to Chris Grove, an analyst with California-based gaming research firm Eilers & Krejcik Gaming.

“Everything I see leads me to believe that gambling will play a major role in the growth and development of esports,” he said.

‘That’s the strength of Vegas’

It will take buy-in for Las Vegas to reach its potential as an esports destination, experts say.

Grove said the U.S. is large enough to have several esports hubs, each attracting slightly different audiences. Las Vegas’ key will be consistency.

“As Vegas hosts more successful events, the city is likely to continue to earn a reputation in the esports community,” he said. “Vegas is an amazing backdrop for all sorts of events, and that’s the strength of Vegas.”

One hurdle, he notes, is casinos aren’t necessarily designed for a younger, gaming crowd. Esports events must be planned “holistically.”

A generational gap exists between the hospitality industry’s decisionmakers and esports experts, said Jairo Urcuyo, founder and CEO of esports organization Las Vegas Inferno. A hotel-casino simply throwing a tournament each week isn’t going to cut it; proper marketing and concerted effort to reach a new audience are necessary.

Urcuyo and others highlight an “authenticity” problem that is hard to define but gamers know it when they see it. They bristle at perceived pandering and are skeptical of those who want their business but don’t share their passion, he said.

LaPorte, with the esports alliance, said esports athletes are celebrities with legions of fans, comparable to LeBron James in the NBA. Las Vegas already caters to a celebrity culture, he said, and city promoters must lean into “nerd culture” and attract popular gamers to town; their fans will follow.

“The subscribers to a popular celebrity on Twitch are rabid fans,” said Robert Rippee, director of the Hospitality Lab at UNLV’s International Gaming Institute. “They consume every word, the actions, they’re highly engaged.”

“And that is a lesson for everybody on loyalty. If we can achieve that kind of loyalty, oh, my gosh, it’s game over for anything else.”