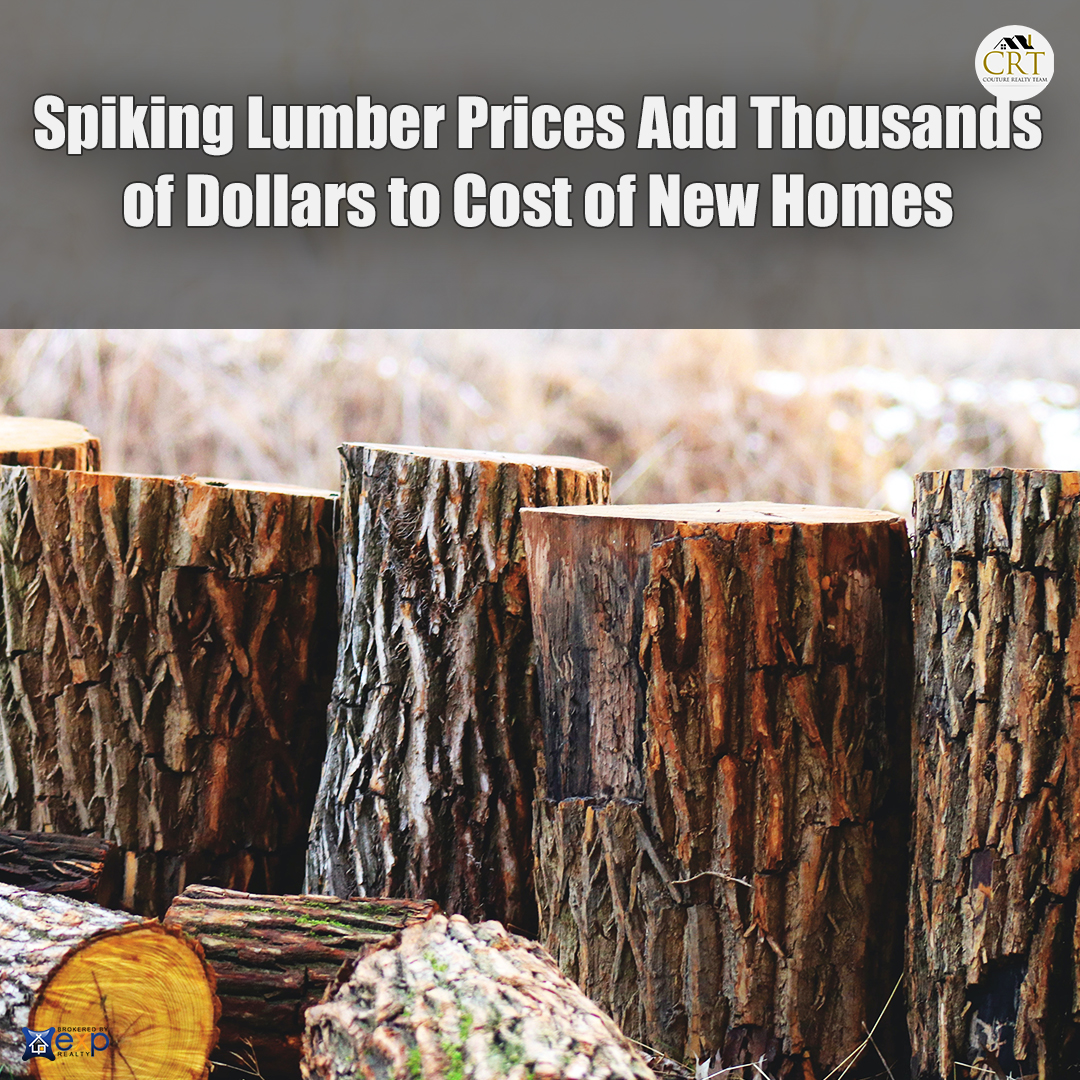 A U.S. lumber shortage has caused prices to more than triple within the last year and to add thousands to the overall costs of new home construction in Southern Nevada.

Across the U.S., the average price for a single home shot up by $35,872, according to an analysis conducted last week by the National Association of Home Builders.

New single-family homes, on average, can cost $25,000 more in the valley, said Nat Hodgson, CEO of the Southern Nevada Home Builders Association, an organization affiliated with the NAHB.

And for larger homes in Southern Nevada, the lumber shortage could cost upward of $50,000 to $60,000 more. “It’s an increase of that much of the same wood that you use 12 months ago for the house next door,” he said. The added costs also impact cabinets, doors and flooring.

“I’ve been in this industry since ’93, right here in this town, and this talk about lumber – I have never seen something so large increase so much,” added Hodgson. “I’d love to tell you it’s going to be over in a week or two, but it’s not unfortunately. It’s pricing the heck out of people to not be able to afford to buy a house.”

Lumber prices up over 200 percent

Lumber costs started creeping up last year, though in recent months, it reached a crescendo.

The price per thousand board feet of lumber normally costs between $200 and $350.

According to the latest analysis by Random Lengths, the industry’s tracking firm, the prices as of the week ending April 23, show the price of framing lumber near $1,200 per thousand board feet – up nearly 250 percent since last April.

About five weeks ago, prices for lumber dropped about 15 percent but later jumped 210 percent, said Hodgson. Lumber is typically used in framing a new home.

“It’s up to $1,300 as of today,” said Hodgson. “That’s insane. In history, it’s never been like that. If it was a small line item in a house, it would be OK if it’s going to increase your house cost by 1 percent. But no, lumber is one of the largest line items in the house budget.”

As of Friday, the July lumber futures listed on the Chicago Mercantile Exchange reached an all-time high of $1670.50 per thousand board feet.

Adding to the complication: Many companies used to be able to have a fixed price on lumber for six months. Now, home builders can’t lock down prices for more than a week. The volatile price swings could put some firms in financial straits.

“You sell Mr. or Mrs. Smith a house today and you’re not starting for another month, that builder is on the hook,” said Hodgson. “I don’t think any builders are going to have a contract that a buyer is going to sign saying, ‘Hey, we cannot guarantee this commodity so whatever it goes up you need to pay the difference.’ It would be a fair contract but who’s gonna sign it?”

Hodgson said one local company has already told him that it’s taking a pause right now because of the volatility and exorbitant costs of lumber. “One of them just stopped selling for a while. They’re like, ‘I can’t afford to miss it by $70,000,’” he said.

And because the housing market is red-hot in Southern Nevada, the lumber shortage means a higher sticker price for new construction homes. It doesn’t necessarily mean that buyers aren’t purchasing new homes because of the shortage. Many homebuyers are still willing to pay top dollar.

“If we had to raise prices $40,000 tomorrow to recoup everything, we will still sell every house we’re building because these buyers from the West, they’re still looking at us at one heck of a bargain,” said Hodgson. “Some buyers are coming from San Francisco and they’re going, ‘Oh man, this is affordable.’”

For locals, the jacked-up prices for lumber might be unaffordable.

“The sad part is that Nevadans aren’t gonna be able to afford these houses,” said Hodgson. “I’ve got a 21- and a 23-year-old son still living at home that are not looking to move out anytime in the near future because they can’t afford to.”

The Las Vegas housing market isn’t seeing any signs of slowing down. Many Americans are looking to the suburbs, are flush with cash, and low interest rates have helped fuel a housing frenzy.

“Buyers are extremely motivated right now to buy,”. “They have a lot of cash, have good credit and want to buy homes. In my career, this is the most financially capable group of buyers I’ve ever seen. The proportion of cash buyers has gone up since the pandemic. Many are willing and able to buy these homes for their families.”

The lumber frenzy is just the latest example of how the pandemic is shining a spotlight on a fragile timber supply chain. Sawmills are facing difficulty meeting the increase in demand while shipping and trucking delays have added to costs, which are passed to homebuyers.

Hodgson noted that there are several explanations for why lumber prices have increased so much.

The North American Free Trade Agreement, or NAFTA, took a toll on several commodities with tariffs on lumber, copper and steel products. he said.

“It kind of backfired for our lumber because it put a 25 or 30 percent immediate tax on top of what we’re already paying,” Hodgson said of the tariffs’ impact.

Home builders get most of their lumber products from Northern California and Oregon. In California, wildfires over the last few years impacted the lumber industry and its output.

The COVID-19 pandemic also exacerbated production issues: Many sawmills were not operating at all or at lowered capacities at the onset of the pandemic. Demand for lumber is also driven by Americans looking to remodel or expand their existing homes. All wood products have been going up.

Andrews said all aspects of building a home have seen supply chain issues. Not just lumber.

“We’re seeing spot shortages up and down the supply chain,” he said. Among them are appliances, paints, A/C condensers, or certain types of adhesives.

“It can be very short in supply and the costs can really fluctuate: Lumber just happens to be the biggest,” he added. “A perfect example right now is that paint is really hard to get a hold of.”

Andrews said that he’s also been hearing of manufacturing shortages and bottlenecks in transportation, whether it’s by rail or by ship, for lumber and other materials that go into building a home.

“We’ve never seen it this volatile before but we have seen volatility when the housing market gets hot,” he added. “Housing is such a huge component of the worldwide demand for lumber. And when housing gets hot, lumber gets expensive: Unfortunately we are kind of forced to pass those cost increases through prices of our homes.”

So how will lumber get back to pre-pandemic prices? Hodgson said it will require action from the federal government.

“First of all, let’s release NAFTA on the Canadian lumber because it’s hard enough,” said Hodgson. “We’re asking the Biden administration to please meet with the lumber association and talk with them because this is just out of control. There’s nothing we can do.”

In March, the National Association of Home Builders and a coalition of affordable housing organizations called on Commerce Secretary Gina Raimondo to examine the lumber supply chain, identify the causes for high prices and supply constraints and “seek immediate remedies that will increase production.”

Failing to do so, the organizations and groups said in the letter, would threaten the economic recovery and housing affordability.

Democratic Rep. Dina Titus met with Hodgson earlier this week. Titus said she’s working to get U.S. sawmills up and running. Hodgson is meeting with other members of Nevada’s congressional delegation this month on the volatility of prices.

“We must expand access to affordable housing in Southern Nevada and that requires lowering lumber prices,” Titus said in a statement Friday to the Review-Journal. “Right now, I’m focused on the federal government’s effort to vaccinate more of the population which will allow fully staffed sawmills across the country to produce more lumber and reduce the costs to homeowners.”

Titus added that the U.S. trade representative is “working closely” with the Canadian government to “address the tariffs on the supply coming across the border.”

For luxury homes in Vegas, lumber costs can add up to an additional $100,000. In the meantime, there’s no estimate as to when lumber prices will retreat to pre-pandemic levels.