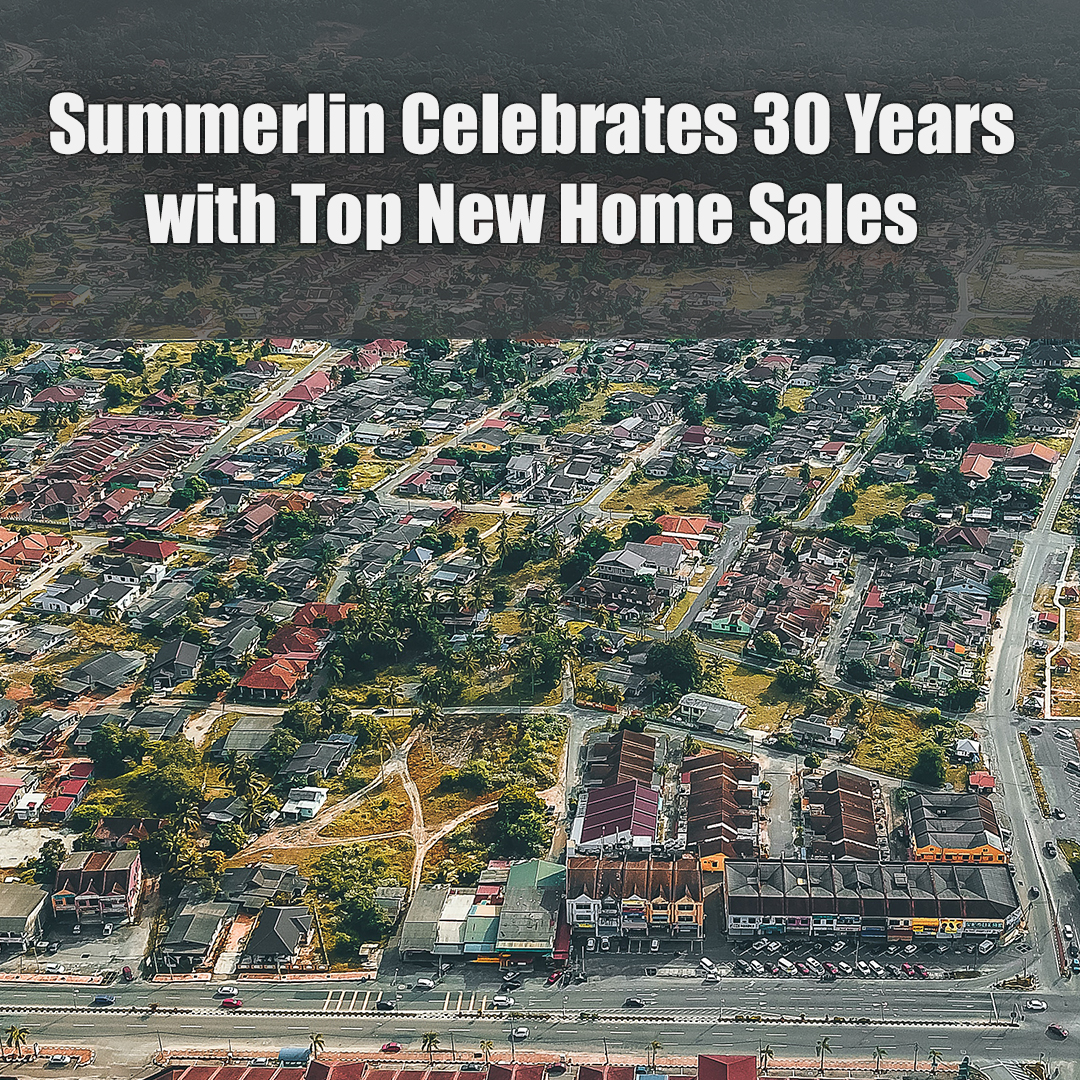 The master-planned community of Summerlin, which began in 1990, has landed on the nation’s list of top-selling communities 24 times in the last 26 years, according to national real estate consultant, RCLCO. (Summerlin)

The master-planned community of Summerlin, a development of The Howard Hughes Corp., continues its run as one of the country’s top-selling MPCs. Celebrating it 30th anniversary this year, Summerlin was originally envisioned in the late 1980s by founders of the Hughes’ organization as a community that would set a new standard for living in Las Vegas.

Named for Howard Hughes’ paternal grandmother, Jean Amelia Summerlin, the community has not only established the area as a premier place to live, work and play, with an outstanding quality of life and a business-friendly environment, it has landed on the list of top-selling master-planned communities 24 times since national real estate consultant RCLCO began tracking new home sales in MPCs 26 years ago.

“Summerlin is in the company of only a handful of communities nationwide to enjoy such remarkable and sustained success, maintaining its position among the top 10 best-selling communities and the best-selling MPC in Nevada, a testament to Summerlin’s enduring appeal as it enters its fourth decade of development,” said Gregg Logan, managing director of RCLCO.

From the beginning, Summerlin was the nation’s top-selling master-planned community based on new home sales 10 times during its first 13 years.

“Before RCLCO began tracking MPC sales in 1994, Arthur Andersen Real Estate Services Group ranked communities nationwide in 1992 and 1993, and Summerlin earned the No. 1 spot in the country on that list, just two years after development commenced, and I am proud of the exceptional standard we have maintained,” said Kevin T. Orrock, president of Las Vegas Region, The Howard Hughes Corp.

Once RCLCO began tracking master-planned community sales in 1994, Summerlin had an impressive run in the No. 1 spot from 1997 through 2002, and has spent 11 years on RCLCO’s top 10 list, nationally, since 2002, of which eight of those years have been on the top five list.

RCLCO has also ranked Summerlin among the top 10 overall best master-planned communities five times in the past decade.

Summerlin is home to more than 100,000 residents who enjoy an unparalleled quality of life in Southern Nevada, created in part by an extraordinary list of amenities — including more than 250 parks of all sizes, more than 150 miles of award-winning trails, sports fields and golf courses.

Summerlin’s top ranking is also due in part to the community’s continuing evolution of Downtown Summerlin, its 400-acre walkable, mixed-use urban core. Summerlin is the only community in Southern Nevada with its own downtown, which today boasts 106 acres of fashion, dining, sports and entertainment, along with an outdoor pedestrian retail destination that also includes Red Rock Casino, Resort &Spa; City National Arena, the National Hockey League practice facility for the Vegas Golden Knights; and Las Vegas Ballpark, a Triple-A baseball stadium and home of the Las Vegas Aviators, the city’s professional baseball team, member of the Pacific Coast League and affiliate of the Oakland Athletics.

This year, despite the pandemic and its economic impact on the hospitality-driven city of Las Vegas, Summerlin’s new home sales are currently pacing ahead of 2019 sales.

“We believe Summerlin’s exceptional and sustained performance throughout 2020 is due in large part to the fact that MPCs are proven to better hold their value during times of crisis, when there’s historically been a flight to quality,” Orrock said. “With the reprioritization of values triggered by the pandemic, the concept of home — and a quality work-life experience — has never been more important. Summerlin’s active, healthy lifestyle is the ultimate office perk, in a one-of-a-kind, amenity-rich environment with urban walkability, proximity to Red Rock Canyon, and an elevated location overlooking the Las Vegas Valley.”

Developed by The Howard Hughes Corp., Summerlin began to take shape in 1990 and has ranked in the country’s top 10 best-selling master-planned communities for nearly two decades.

Located along the western rim of the Las Vegas Valley, Summerlin encompasses 22,500 acres with approximately 6,000 gross acres still remaining to accommodate future growth, including infrastructure, open space and common areas, all within the master plan.

The community is currently home to nearly 100,000 residents who enjoy an unparalleled list of amenities. These include more than 250 neighborhood and village parks, more than 150 completed miles of trails, 27 public and private schools, 14 houses of worship, 10 golf courses, shopping centers, medical and cultural facilities, business parks and dozens of actively selling floor plans.

Homes are available in a variety of styles — from single-family homes to town homes — priced from the $300,000s to more than $2.5 million. For information on custom homesites in The Ridges, call 702-255-2500. Luxury apartment homes offer monthly rents starting from the $900s. Visit summerlin.com for more information.