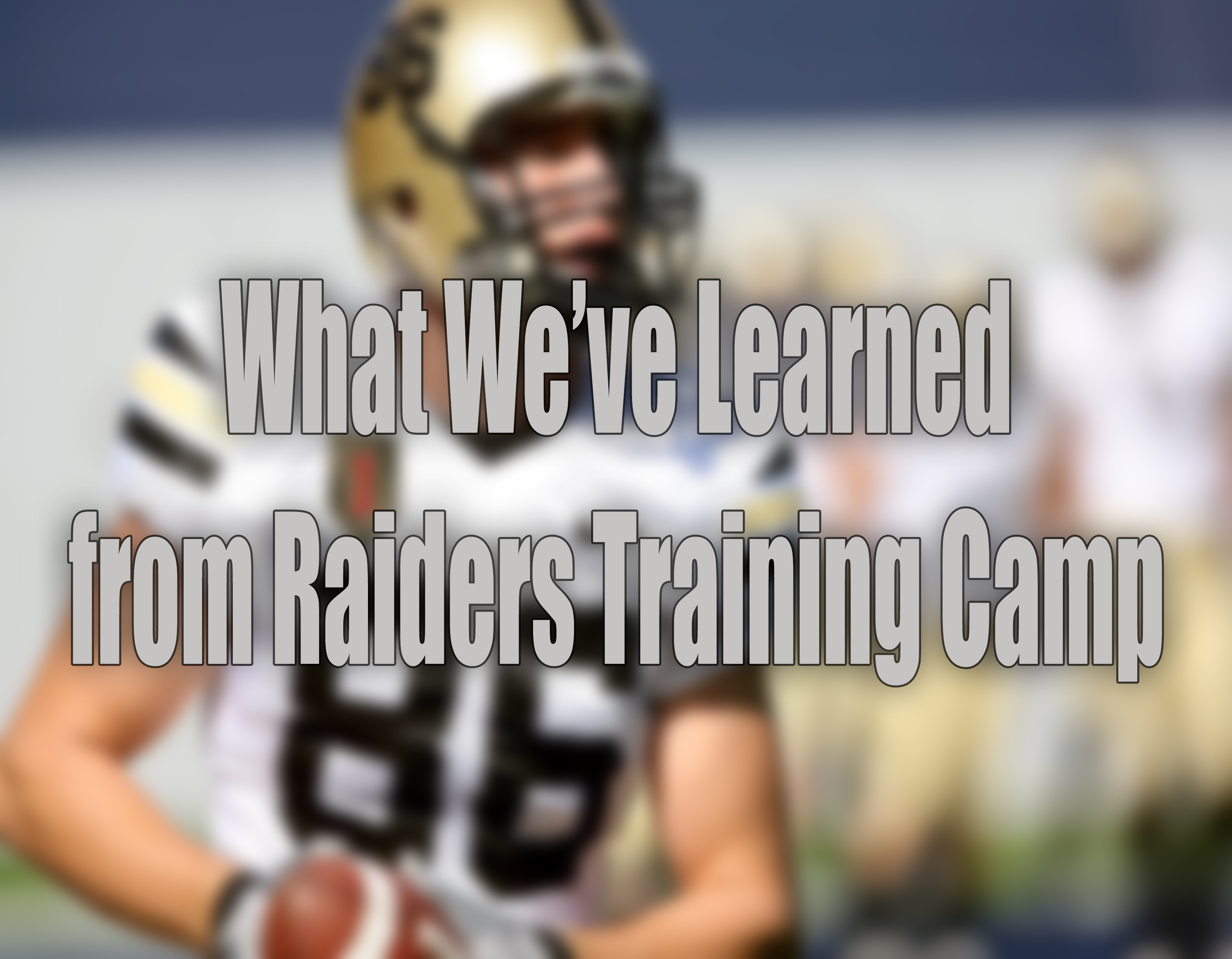 The Raiders still have more than a week of training camp left, but for the media the curtain has been drawn. The remainder of Las Vegas’ practice sessions will be closed to outside observers, so reporters won’t be able to watch any more action on the field until the games begin for real on Week 1.


The first two weeks of camp did provide plenty of insight into what the Raiders will look like in 2020, however. So what have we learned to this point?


The most important component of any team is the quarterback, and the Raiders looked like they might have some questions surrounding the position in the offseason, especially after Mike Mayock and Jon Gruden signed veteran Marcus Mariota as a backup/potential challenger for the starting job.


Fast forward to now, and those thoughts seem laughable in retrospect. Incumbent Derek Carr has thoroughly outplayed Mariota (and No. 3 QB Nathan Peterson) to the point where it would take an injury in order to unseat Carr. Of course, it’s easy for a seventh-year veteran to look good in training camp, so Carr had a clear head start in the quarterback “competition,” but it’s a good sign for the team that he stomped out any uncertainty in short order.


Now, can Carr carry over his strong play to the regular season? That’s the only question left for him to answer at this point.


Ferrell is part of revamped line


Now that 2019 is in the rearview mirror, it’s kosher to admit that No. 4 overall pick Clelin Ferrell played like a bust last season. But after reshaping his body and rededicating himself to technique, the Raiders coaching staff seems convinced that Ferrell is in store for a breakout sophomore campaign.


That would be huge for Las Vegas, which is counting on Ferrell to be a leader on the revamped defensive line. Maliek Collins has drawn raves at defensive tackle and Maxx Crosby is coming off a 10-sack rookie year, while tackle Maurice Hurst has shown progress in camp; that leaves Ferrell as the weakest link on the line. If he’s good — or at least better than his rough debut season — the Raiders’ maligned defense has a chance to be competitive.


If Ferrell doesn’t improve from last year, he won’t have much of a leash. Arden Key has impressed coaches in camp as a pass rusher, and Carl Nassib was brought in as a high-priced free agent. Both players are capable of taking Ferrell’s job if he doesn’t produce.


When the Raiders signed Javin White as an undrafted free agent, it seemed like a nice way for the pro franchise to endear itself to its new home city by inviting the local college star to training camp. And that provided a feel-good, underdog angle at the beginning of camp.


Well it’s not warm and fuzzy anymore — it’s real. White has been so good on the practice field and made so many plays at his outside linebacker position that it’s looking more and more like he is going to make the 53-man roster for Week 1.


Under normal circumstances, White would have to back up his practice play by performing well in preseason games before the coaches would consider keeping him around. But in this truncated, COVID-19 scenario, White has taken every opportunity and knocked it out of the park. And it helps that he plays a position of need and provides a skill (pass coverage) that is in high demand throughout the league.


The team is healthy


While some teams throughout the league had players opt out due to COVID-19 concerns, the Raiders reported to camp with a full complement of players. And the injury bug has yet to strike beyond the normal dings and dents (offensive tackle Trent Brown missed the first couple weeks but looked fine at Wednesday’s practice, while second-year cornerback Trayvon Mullen has missed the last three practices but isn’t expected to miss serious time).


The most serious injury has been Tyrell Williams’ torn labrum, but he’s going to attempt to play through it. And if he’s limited, the Raiders mitigated the impact by drafting two receivers with high draft picks (and both Henry Ruggs and Bryan Edwards have performed well in camp).


Half the battle of training camp and preseason is getting through without any devastating setbacks. Since there are no exhibition games this year, the Raiders just have to survive a couple more weeks of practice and they’ll be ahead of the curve in terms of injury.


None of it will matter unless the team avoids the virus


Gruden has said multiple times that the team’s top priority is to crush the virus, and he’s right. The NFL won’t be playing in a bubble — the model will be the same as Major League Baseball’s plan, complete with travel — so an outbreak within any team could threaten to derail the entire schedule.


That would be disappointing for the Raiders and their city full of new fans. Even if the team isn’t a playoff contender in its first season in Las Vegas, it’s still an intriguing collection of young talent that should be interesting to watch develop. The Raiders have done their part to this point of camp, and their continued vigilance will be the most important storyline throughout the season.