Why a 2022 Housing Market Crash Is Unlikely

Why a 2022 Housing Market Crash Is Unlikely 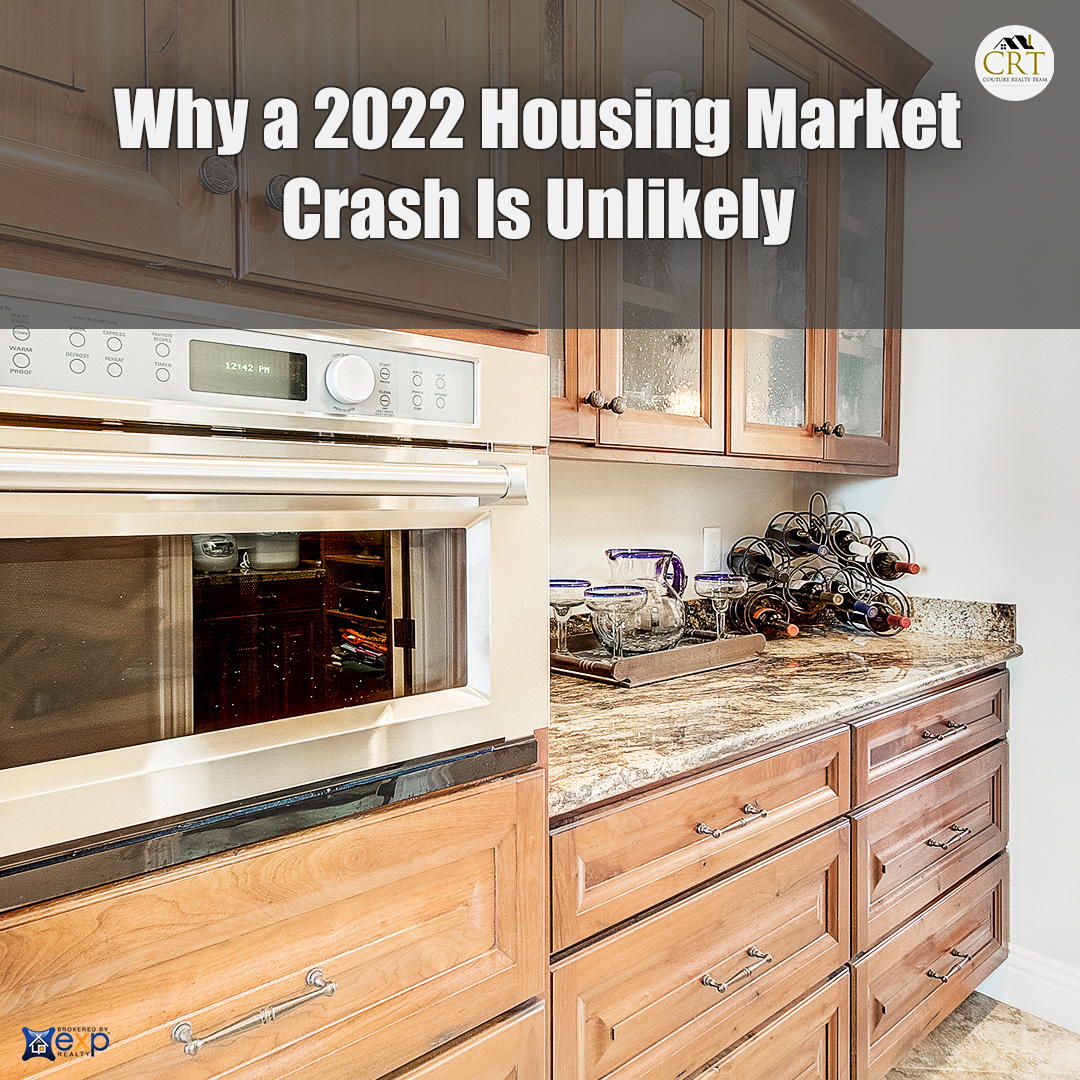 Judging by the emails we receive, it seems many people are still concerned about the prospect of a U.S. housing market collapse over the horizon. The questions vary, but the overall theme is the same: Will the U.S. real estate market crash in 2022?

The short answer is that no one knows. As the past year has shown us, there are some things we just can’t predict. But based on past and current trends, it seems highly unlikely that the U.S. housing market will crash in 2022. The reasons for this are outlined below. Mainly, it comes down to a supply-and-demand imbalance.

According to most analysts, a real estate market collapse or crash is not likely to happen during 2021 or 2022. The more likely scenario, according to some industry watchers, is that home prices will begin to rise more slowly in the months ahead. And that’s something we actually need at this point.

To understand the reason why a housing market crash is unlikely, we have to look at what that term means:

A real estate market collapse or crash usually follows a steep increase in prices. This price growth is often driven by the strong demand for homes, along with the speculation that demand will continue. Builders and developers then increase production to meet the demand, with more homes being built. At some point, demand begins to decline while supply is still rising. This leads to a steep drop in home values.

But that’s not where we are right now. Not even close. As of spring 2021, housing market inventory remains very low in most U.S. cities. The demand from home buyers, on the other hand, continues to soar all across the country. Low mortgage rates and other factors have increased demand among buyers, at a time when supply is seriously constrained.

While we are seeing some “overheated” conditions on the demand side (bidding wars, offers above list price, etc.), the supply side does not reflect a typical market crash scenario. Instead of having too much supply relative to demand, we currently have too little. In most real estate markets across the U.S., there just aren’t enough homes listed for sale to satisfy the demand.

Our view is that it would take a significant, unprecedented, and unforeseen economic event to cause a U.S. real estate market crash in 2022. If we learned anything from housing trends over the past year, it’s the fact that home buyers are largely undeterred by the ongoing pandemic. They’re buying homes in such numbers that inventory has fallen to record lows in many U.S. cities.

A housing market crash in 2022 seems far-fetched at this point. Current real estate trends simply don’t support that kind of scenario. That doesn’t rule it out entirely. It just means that a price collapse appears highly unlikely.

In fact, many housing market analysts and economists have recently predicted a continued rise in home prices through the end of 2021 and into 2022. Some experts believe house values will keep rising over the coming months, but possibly at a slower pace than in 2020 and early 2021.

Earlier this month, the property data and analytics company CoreLogic published a housing market update that focused on prices. According to their report:

Some perspective would be helpful here. The 10.4% gain over the past year or so is much higher than the average annual increase in home values, going back 40 years or so. That’s an unsustainable level of price growth, because it far exceeds wage and earnings growth. In other words, prices can’t rise at the pace forever. Eventually, house values will level off as more and more buyers get priced out of the market.

CoreLogic’s long-range forecast calling for 3.2% price growth is a more “normal” level of appreciation. That is, it more closely resembles the annual averages of the past 40 years. So, essentially, they are predicting a return to “normalcy” as we move into 2022 — not a housing market crash.

But not everyone is predicting a slowdown in price growth. In April of 2021, the real estate data company Zillow issued the following statement: “United States home values have gone up 10.6% over the past year and Zillow predicts they will rise 10.4% in the next year.” See their chart above.

Here’s another positive sign that makes a 2022 real estate market crash seem even less likely. Mortgage delinquencies (which occur when people fall behind on their monthly payments) have declined month after month since August of 2020. This is according to a recent report from CoreLogic.

According to Frank Martell, president and CEO of CoreLogic: “This is a good sign, and considering the improving picture regarding the pandemic and climbing employment rates, we are looking at the potential for a strong year of recovery.”

Going into the housing market crash of 2008, mortgage delinquencies and foreclosures were soaring all across the U.S. But things have changed since the better since then. Mortgage lenders are no longer offering some of high-risk products that were common during the early-2000s housing boom.

It’s also worth mentioning that real estate conditions can vary widely from one housing market to the next. For example, consider the glaring difference between these two major U.S. cities:

San Francisco is a bit of an outlier here. In most U.S. cities, home prices rose over the past year to some degree.

While they probably won’t “crash” in 2022, overheated housing markets like Boise, Sacramento and Seattle will likely see slower home-price growth later this year and into next. Other markets, where prices are rising more gradually, could see a continuation of that trend going into 2022. It varies.

It’s a Different Kind of “Boom” This Time

The last housing market crash of 2008 was brought on by a combination of builder speculation, overbuilding, and reckless mortgage lending practices. “Easy” mortgage loans led to a surge in demand from newly qualified borrowers. This in turn caused a sharp rise in construction, especially in places like the Phoenix and Las Vegas metro areas.

But here again, the past does not reflect the present. Instead of overbuilding, developers have been doing the exact opposite over the past decade. They haven’t been building enough homes to meet the demand from buyers. There are many reasons for this, including labor shortages and rising material costs.

Jeffrey Mezger, CEO of the national builder KB Home, recently told CNN Business that the company has been “under-building for the last 15 years.”

According to a recent analysis from the research team at Freddie Mac, the U.S. real estate market is about 3.8 million homes short of meeting the demand from buyers nationwide. In the words of Sam Khater, chief economist at Freddie Mac: “We should have almost four million more housing units if we had kept up with demand the last few years. This is what you get when you underbuild for 10 years.”

Additionally, housing market inventory levels have plummeted over the past year in many U.S. cities. Supply was tight to begin with, going into the pandemic, and it has since gotten tighter.

According to an April 2021 report from Realtor.com: “Although the trend of sellers putting their home on the market improved slightly from February, 20.0% fewer homes were listed for sale in March [2021] than a year ago.” In some of the hottest housing markets, like Austin and Tampa, the total number of active listings dropped by 70% or more during that 12-month timeframe.

It’s hard to imagine a real estate market crash in 2022, with such an imbalance between supply and demand.

Disclaimer: This story contains housing-related forecasts and predictions that are the equivalent of an educated guess. The Home Buying Institute makes no claims or guarantees about future conditions within the real estate market or broader economy.