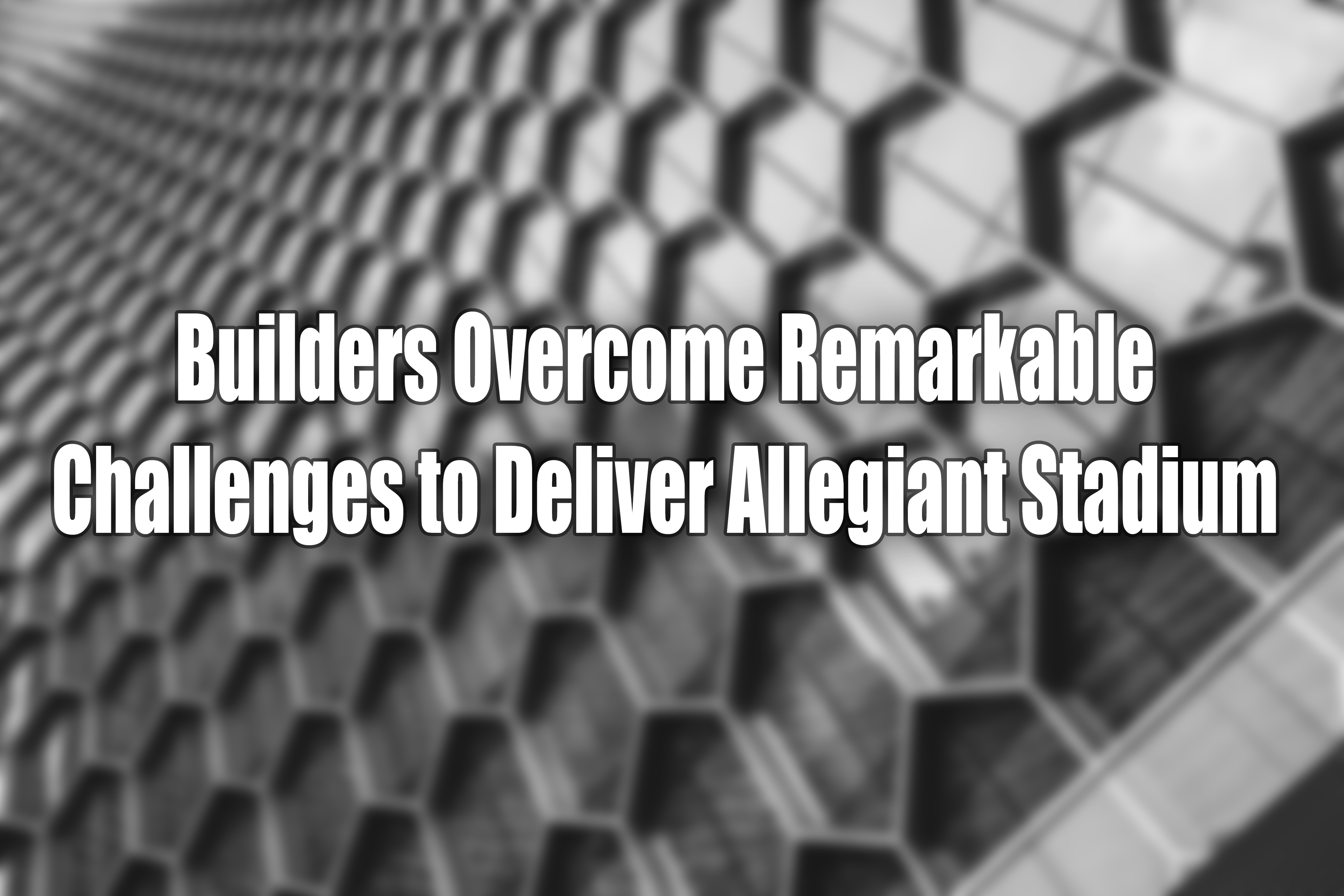 When the Raiders kick off their debut season in Las Vegas next month, they will do it in one of the NFL’s most expensive stadiums.


And like any team that has overcome adversity to become champions, the construction team that built Allegiant Stadium battled remarkable challenges to finish the project on a tight timeline.


Crews broke ground in November 2017, giving them just over two and a half years to finish the 65,000-seat stadium.


Along the way, they ran into what might be considered normal hiccups, like problems installing the cable net system that supports the stadium’s signature translucent domed top.


But then there were things nobody could have anticipated: An international trade war that threatened steel supplies and the coronavirus pandemic, which sickened construction workers and sidelined other major projects.


“Allegiant Stadium is definitely going to go down in our collective companies — Mortenson and McCarthy — as one of the most amazing accomplishments that either company has completed,” said Eric Grenz, vice president of operations for the joint build team.


Raiders President Marc Badain said, “We’re extremely proud of the workforce in Nevada and what they accomplished through some very challenging circumstances.”


After the pandemic took hold in the spring, more than a dozen workers tested positive for the coronavirus, forcing the temporary closure of affected work areas for cleaning.


Despite the heat, workers had to wear face coverings and some work was shifted to the evening to reduce the number of people on site during the day, which could reach 2,000.


Still, work continued, even as some other big projects, such as the MSG Sphere entertainment complex on the Strip, were forced to cease operations.


“When you look back at what this team has been through and what they’ve endured, it’s pretty amazing,” Grenz said. “I think most companies probably would have thrown in the towel a long time ago.”


On Friday, Mortenson-McCarthy announced it had received a certificate of occupancy, marking the end of substantial construction. It is unclear, however, when fans will get to enjoy the stadium.


The first major planned event, a Garth Brooks concert on Aug. 22, was postponed until next year because of the pandemic. And the Raiders announced this week they would play this season without fans in attendance.


The first game at Allegiant Stadium is set for Sept. 21, when the Raiders host the New Orleans Saints on Monday Night Football.


When spectators are eventually allowed in Allegiant Stadium, they won’t be disappointed, Grenz said.


“I would tell people that Allegiant Stadium is second to none when you talk about the look, the feel, fan amenities, the experience,” he said. “It’s far better than any stadium that I’ve ever been in.”


Grenz, who has been with Mortenson Construction over 15 years, should know. His company has built stadiums including U.S. Bank Stadium in Minneapolis the $600 million-plus Truist Park, home of the Atlanta Braves. At $5.5 billion, SoFi Stadium, the new home to the Los Angeles Rams and Chargers, tops the most expensive stadium list.


Previously, the most expensive stadium ever built was the $1.6 billion MetLife Stadium in New Jersey — home to the New York Giants and New York Jets — which opened in 2010.


Grenz described the $2 billion Allegiant Stadium as “a sleek, futuristic building. The inspiration behind that was for it to look like a sports car, kind of like a Tesla.”


Among Grenz’s favorite aspects of the Las Vegas stadium are its moveable 20-million-pound “field tray” playing surface and massive sliding doors that open to allow for views of the Strip.


The field tray, which contains a natural grass field, moves on 540 electrically powered wheels, allowing it to retract and expose a surface for concerts or other events.


“That will be the largest 3D-printed structure in the world,” Grenz said. “We’ve put in an application to get it put in the ‘Guinness Book of World Records.’”


Steve Hill, president and CEO of the Las Vegas Convention and Visitors Authority, said the stadium “will not only reinforce the destination’s growing reputation as the sports capital of the world, it will also play a central role in the economic recovery of our city.”


“We look forward to the day it debuts to locals and tourists alike to offer what will certainly be an only-Vegas experience,” he said.