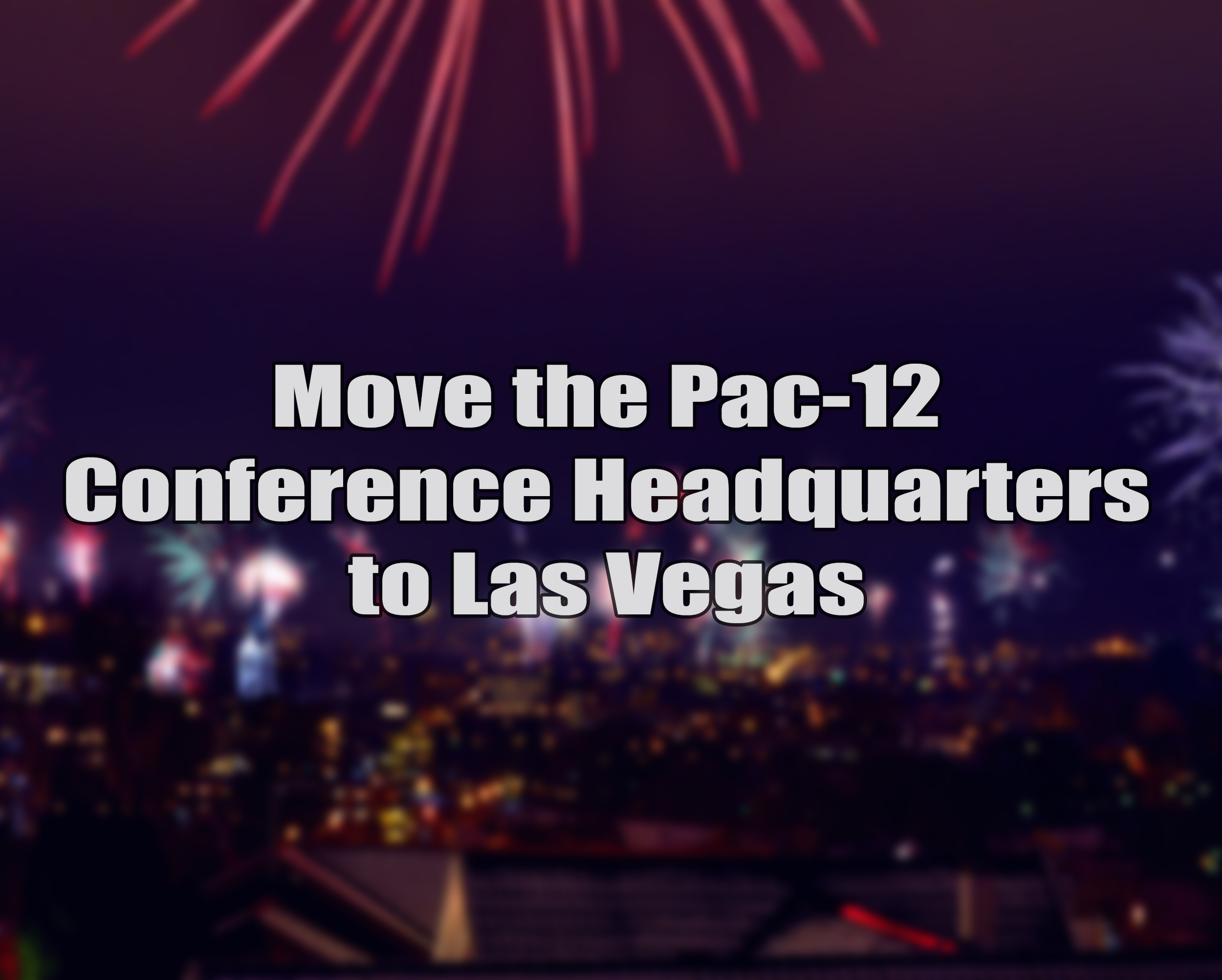 The list of reasons over the years is too numerous to count but news that nearly 90 Pac-12 Networks employees would be furloughed and the conference’s entire digital team would be cut loose is just the cherry on top of the other, pyramid of cherries sitting on top of the cow manure sundae that is his tenure. The conference will be having cash flow issues just like all of their member institutions to be sure but considering the 12% pay cut Scott took to $4.6 million annually still leaves him as the highest paid commissioner in college athletics by a country mile, it’s a horrible look.


Scott’s bloated salary for what little he has done aside, there’s one other cash flow issue the conference has had for years and it all stems from where they chose to locate their office.


The conference used to be based in Walnut Creek, California, a suburb of San Francisco. Following the launch of the Pac-12 Network back in 2012, the conference knew they would run out of space in an office ill-equipped to handle their needs. So, they packed up and headed for the most expensive real estate market in the United States instead: downtown San Francisco.


The conference moved in to a building that sits just a few blocks from Oracle Park and as you’d expect, they’re paying a hefty price: nearly $7 million dollars annually in addition to $11.7 million in deferred rent. The Big Ten, on the other hand, pays about a fifth the rate for their location outside of Chicago (which appears to mostly be a freeway interchange). The SEC ... merely a $1 in Birmingham. You read that right: the SEC pays in rent what you pay for a McChicken.


That’s to say nothing of the exorbitant cost of living for their employees whose compensation does not even come close to allowing them to live somewhat comfortably near their work. That’s not anecdotal either! My wife was offered a full time producing position there in 2015 and we estimated that, even if I could keep my job as a then radio reporter, we’d have to live in Davis or Vacaville, 60 to 70 miles away, to maintain our lifestyle.


Simply put, keeping the Pac-12 Headquarters in San Francisco is untenable and needs to be rectified as soon as possible. The good news is there’s an easy solution to the problem that still keeps the conference head office within their footprint and benefits their now furloughed employees.


Move the conference headquarters and production studios to Las Vegas.


The conference already hosts their basketball championship tournament there. The championship football game was supposed to move there this year. It will soon be home to the conference’s third most important bowl game. Most importantly though, it’s a hell of a lot cheaper to live and work there than in San Francisco.


Though we don’t know exactly what the costs of having the conference headquartered there would be, you’d be hard pressed to find any location in Las Vegas, even if you plopped it down in the middle of The Strip, that would cost you $18 million in currently and past due rent. The conference is already tied in with MGM Resorts, which owns T-Mobile Arena where the conference tournament is hosted so that may be a natural starting point. COVID-19 has all but shut down large gatherings of people in the near future, large conventions chief among those. Though Las Vegas earns plenty of money through normal tourists popping in for a weekend, a lot of dollars come in from the rental of convention space and people in attendance running up ridiculous bills on the company credit card.


It’s an absolutely mind-boggling amount of space not being used, more than 4,000,000 square feet in the two largest alone. One of those, the Mandalay Bay Convention Center, happens to be owned by the aforementioned MGM Resorts. Given that your largest TV production spaces are generally going to run 15,000 square feet at the absolute most, it stands to reason that there should be a way for the conference to permanently carve out some space at one of those facilities, office space for everyone else included.


That’s even on the most expensive end of the spectrum! If the conference isn’t dead set on the best real estate in the city, they’re sure to find much cheaper options elsewhere. Combined with the much lower cost of living, the conference can continue to pay as little as they do because life just isn’t as expensive in Las Vegas.


If the conference wants to try and justify their location by saying they have two teams close by ... it just doesn’t cut the mustard. Even from a traveling stand point, Las Vegas is just as easy to get in to and out of for every team in the conference, and I’d wager some there are cheaper hotel options for the same quality as well for visiting presidents and athletic directors.


This is a cost cutting measure that doesn’t just serve the conference now, but in the future. Those millions of dollars could be redistributed to schools to help offset scholarship costs; they could be reinvested in equipment for their television studio or in retaining excellent talent that you shouldn’t have let go. It’s a practical move that serves the conference and its members well.


Which is probably why Larry Scott would never do it.